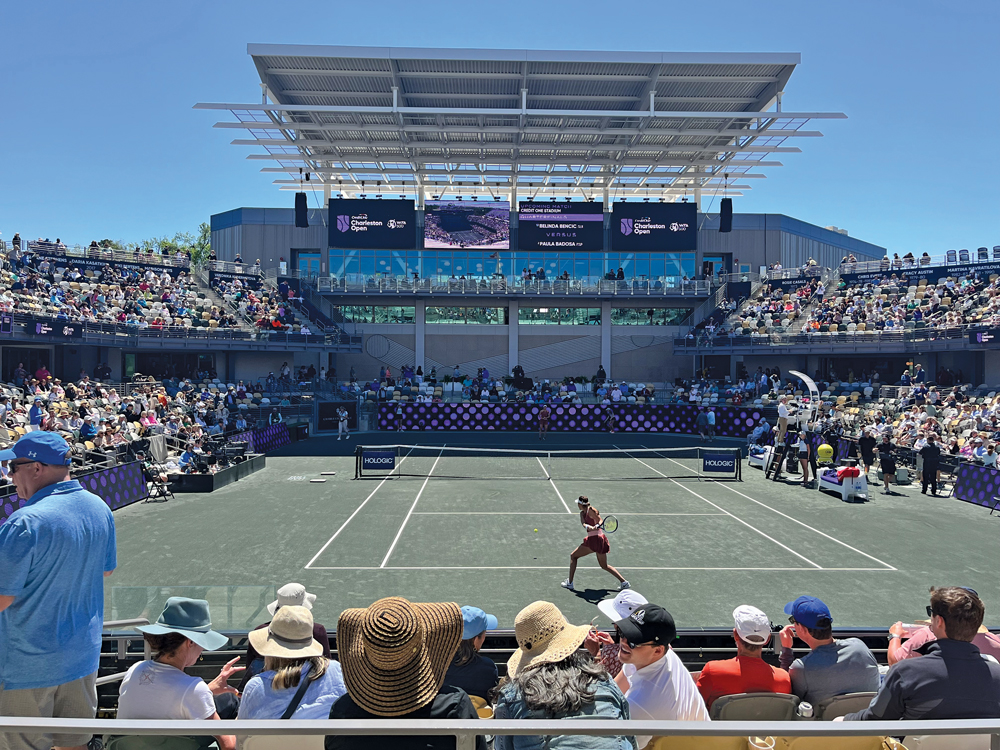 WTA: Do the Charleston

The three-story Stage House is part of renovations to Credit One Stadium, bringing the total capacity to 11,000.bret mccormick

The view from the new owners’ suite at Credit One Stadium near Charleston, South Carolina invites a sunny spring day as players play in a quarterfinal match at the Credit One Charleston Open WTA tennis tournament.

The suite is nearly eye-level with the green clay court and directly faces the new three-story Stage House, part of the more than $50 million renovation that is already swelling the site and the finances of the tournament. Munching on oversized cookies and enjoying the breeze and smacked forehands, it’s hard to imagine the owners’ suite was once a concession stand, the view obstructed by a cinderblock wall.

The early April event felt like something of a re-emergence for the Charleston Open, the oldest women-only tournament based in the United States. It was the first edition of the event with fans since 2019, due to the pandemic, which canceled the 2020 tournament, and the 18-month renovation of the main stadium, built by Choate Construction and designed by the Rossetti architects. Along with the Stage House, which includes modern amenities for players, a second-floor commissary that bolsters the venue’s food and beverage operations, and a stylish third-floor VIP area, the project has added 16 permanent suites, a branch of activity that previously did not exist.

Location: Daniel Island, South Carolina
Owners: Ben and Kelly Navarro
Year of foundation: 1973
Tournament Category: WTA 500
Total Prize Money Commitment: $899,500
Title Sponsor: One Bank Credit
Renovation: A more than $50 million project that created 16 permanent suites and a three-story stage house at one end of Credit One Stadium, also enclosed at the top of the seating bowl and increased the stadium’s capacity to 11,000 , added a new entry spot on the tournament court, and resurfaced on all 16 courts.

“It’s so nice to be in [the renovated venue], it’s so nice to have our fans back,” said Bob Moran, president of Charleston Tennis, which owns and operates the tournament. “It’s a beautiful, clean stadium and a space that we haven’t been able to use for three years and now it’s brand new. It’s been fantastic for us.

The event, an annual staple along the South Carolina coast that marks the seasonal pivot from cooler weather to warmer days ahead, now has a stadium befitting the beautiful setting framed by Spanish moss and tall grass marshy. Tournament owners Ben and Kelly Navarro paid for the project as a gift to the City of Charleston, which owns the stadium. The Navarros own Credit One Bank, which acquired title sponsorship and naming rights to the tournament and stadium last July.

A new open plaza welcomes fans, but a box office no longer does, as part of the tournament’s digital transformation. Ticketing is now digital, and a new venue app created by Venuetize serves this year’s tennis tournament and 22-show concert series. Credit One Stadium has also become cashless, although it has reverse ATMs dotted throughout.

The main stadium concourse at the event level was essentially flipped over to create the permanent suites, with bathrooms and concession stands that were previously up to the seating bowl now outside the concourse, facing inside. The suites, which range from $80,000 to $120,000 for the year, concerts included, sold out.

“It was a huge win for us,” Moran said. “It almost feels like a living room because the suite level is so low.”

Prior to the renovation, suites were one of the tournament’s many impermanent features. The players’ dining hall and gym have been temporarily set up each year, along with media operations. There is now a permanent room on the second floor of the Stage House facing the pitch for broadcast (and concert) production, as well as a space where Tennis Channel on-air personalities can relax between tennis matches. call, what they used to do, you guessed it, a tent.

“That was one of the main selling features, this new facility, this new land,” said Credit One sponsorship manager Michael Norris. “We wanted to make sure that these world-class tennis players had a state-of-the-art venue that they could be proud to come to, because ultimately we want to attract the best players here.”

Improved logistics for players and live music were the two immediate goals of the renovation. Players and concert roadies can park right up to the back of the Stage House, instead of having to drive across the tournament campus in either a golf cart or rolling sound equipment.

“The artists loved us; the roadies didn’t,” Moran said.

The logistical detail is already paying off with a solid concert schedule that begins April 23 with Zac Brown Band and includes Elton John.

The renovation also transformed the site’s catering programme, increasing the number of outlets to 115 (compared to 75 previously). Oak View Group has been managing F&B for the tournament since the new commissioner. “Instead of putting food trucks and stuff out there,” Moran said, “we do everything ourselves” and keep the revenue in-house.

The third floor of the Stage House offers room for fans, including a bar.bret mccormick

The Stage House club on the third floor is a bright and airy space designed by LS3P with a large bar and plenty of comfortable seating areas. A porch with rocking chairs overlooks the stadium field. Moran said it was possible the club’s naming rights could be sold, another potentially significant improvement to the results of the event. As a reporter walked by, the brand new smell of a project that had just been completed – Moran said the stadium’s Camatic seats had been collected from Charleston Harbor days before the tournament began – lingered still in the air.

This perch is at eye level with the top of the stadium bowl, which was fully enclosed, increasing capacity from 7,000 seats to 11,000. more solid. The event hosted former champions last week, including Rosie Casals, who won the inaugural Charleston Open in 1973.

“Charleston has long been one of the Tour’s most beloved events, and it’s only fitting that the stadium was unveiled on its 50th anniversary,” WTA President Steve Simon wrote to SBJ in an email. “Each year, Charleston builds on its significant legacy, and this latest major investment reaffirms both its commitment to the Tour and the women’s game in general.”

Moran believes the phasing out of American professional tennis tournaments is affecting the country’s tennis ecosystem. Investments like the one made in Charleston are blunting this trend.

“We have owners who love tennis and believe that tennis in the United States needs someone or a group of people to help lead the way and support events,” he said. .

Only 26% of marketers are fully confident in their audience data