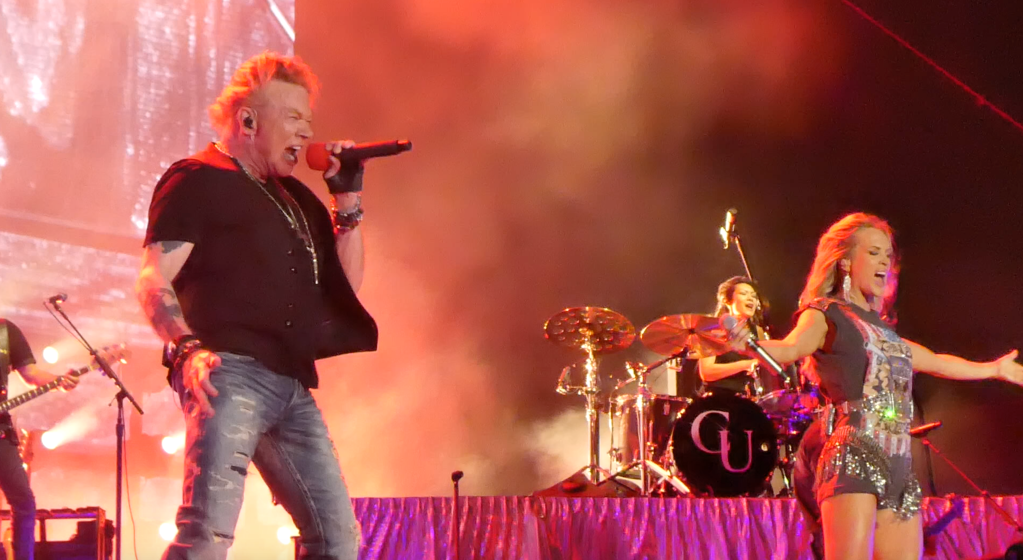 When Carrie Underwood’s band burst into the opening strains of “Sweet Child o’ Mine” at the Stagecoach Festival on Saturday, it felt like business as usual. The country superstar’s Guns N’ Roses fangirl-ism is well known, and she’s already regularly incorporated GNR numbers into her set, even showing an aptitude for appropriating frontman Axl Rose’s sneaky moves. But in a few bars, she let slip the well-kept secret that, tonight, heaven would be a shared experience. “Welcome to the best night of my life,” Underwood shouted. “Give it up for Axl Rose!”

His rock god wasn’t limited to just one song. The telling absence of a hug at the end of “Sweet Child” was a hint that more were on the way. “Did you think we were done?” Underwood bellowed, as her band then burst into a powerful, pitch-perfect arrangement of the GNR number she sang even more often on the road, “Paradise City.”

And that was it — no reciprocal Rose-co-front version of “Jesus, Take the Wheel” or “How Great Thou Art,” sadly, to name just two Underwood setlist staples that had already come together. produced earlier in the set. “I can’t believe we thought we should have more songs after this,” Underwood joked, after Rose walked off stage and had to wrap up her headlining sets with three more solo numbers. filled with a little less gunpowder.

Underwood may have only spoken a little hyperbolically when claiming the biggest night: Her history with “Paradise City” goes back far enough for it to be recorded that she performed the song when she headlined Stagecoach all the way back in 2008.

Underwood was coming off a residency at Resorts World Las Vegas that ended — for now, at least — on April 1. The Stagecoach show was noticeably different, and not just because of the 10-minute Rose List cameo. Gone, of course, are the aerial rope tricks and getting drenched while singing in a waterfall. Plus, there were a lot more fireworks and pyros than the enclosed space of a casino theater could handle…but also the live premieres of two previously unreleased songs, “Denim and Rhinestones” and ” Crazy Angels”. These and the previously released “Ghost Story” are teasers for an upcoming album, “Denim and Rhinestones,” which will arrive on June 10.

Underwood also sang an old one from the “Blown Away” album that hasn’t been revived much in concert, “See You Again,” a ballad about anticipation of reuniting with deceased loved ones in the other. beyond — and she invoked Naomi Judd, who was reported to have died earlier in the day, in the intro.

While Underwood did mention Judd, the act that preceded her on the main stage, Brothers Osborne, took their tribute one step further. Without even saying a word about Naomi Judd, they simply burst into a touching acoustic version of one of the Judds’ signature songs, “Why Not Me,” that was heartbreaking in its simplicity and what went unsaid.

The Osborne brothers also had a highlight when they compared their last experience at Stagecoach with the present, both technically and very personally.

“Four years ago we had a terrible, terrible set,” said TJ Osborne. “I came home and thought, ‘I don’t think we can do this again. And we’ve had to wait a long time, and a lot of things has changed since then, but tonight we’re here to redeem ourselves. And part of that redemption was not just living the moment better musically, but coming back after TJ came out and owning it.

“There are a lot of preconceptions about country music fans,” the singer said. “But thousands of you are here watching a gay man perform tonight. This is the change I want to see. Thank you so much. It’s incredible. This is country music.

Midnight of Stagecoach 2022 ended as another openly gay performer, Orville Peck, closed things out with an afternoon in the Palomino tent.

Earlier in the Palomino, traditionalist Cody Jinks filled the tent, then others, with a crowd as large as could have been seen at this Stagecoach end, and Margo Price brought a more alternative version of country to the venue, joking, “I make country music for people who do psychedelics.