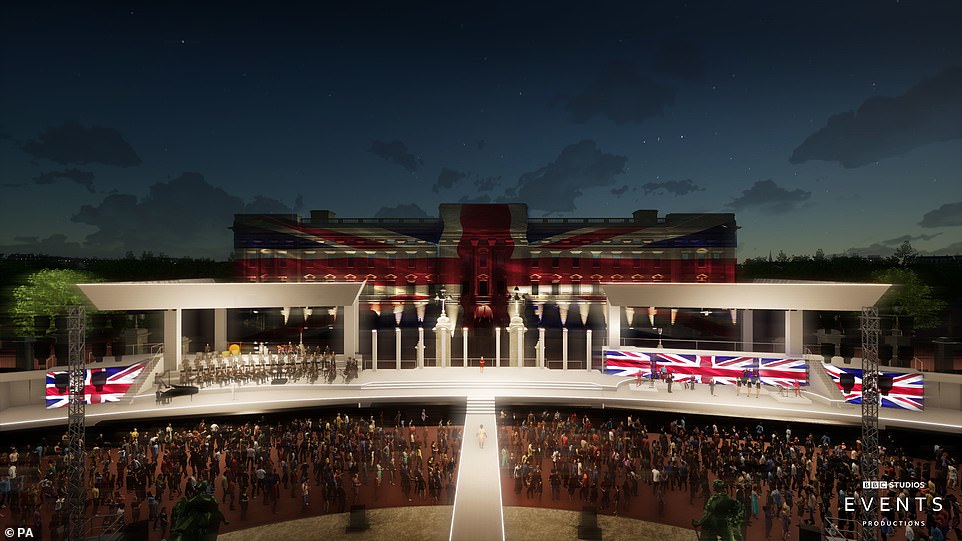 Footage of a spectacular 360-degree stage for the Platinum Jubilee pop concert has been revealed for the first time.

The structure will surround the Queen Victoria Memorial outside Buckingham Palace as 22,000 people, including members of the Royal Family, will gather to watch the BBC’s platinum night at the palace on the evening of Saturday June 4.

Artist’s impressions and moving images show the structure stretching in a circle around the landmark, with the palace in the backdrop projected with the image of a Union Flag, a large portrait of the Queen and lights beaming hundreds of feet into the night sky.

Two other stages – connected to the circular stage by a footbridge – will be built in front of the gates of the palace.

Construction began earlier this week to create 15,000 standing places around the memorial and 7,000 seats in the north and south stands.

The concert promises to feature some of the world’s biggest pop and rock stars, with a full line-up to be announced by the BBC in the coming weeks.

With the celebrations kicking off a month away, the BBC has revealed an artist’s impression of the party scene at the palace

Construction has begun to create 15,000 standing places around the memorial and 7,000 seats in the north and south stands

George Ezra will be among those performing at the high profile event, which will be broadcast live on BBC One.

Some 10,000 people received tickets in a public ballot, and another 5,000 tickets were reserved for key workers.

Other guests will include volunteers, representatives of Royal Family sponsorships and named charity heroes.

Hosts Kirsty Young and Roman Kemp will lead live coverage of the Platinum Party at the Palace which will be shown live on BBC One, BBC iPlayer and on the BBC.

The Party at the Palace is just one part of the four-day program of events planned for the Jubilee weekend next month.

The celebrations will begin on Thursday June 2 with the Queen’s Birthday Parade and Trooping the Colour.

The concert promises to feature some of the world’s biggest pop and rock stars, with a full lineup to be announced soon.

More than 1,400 marching soldiers, 200 horses and 400 musicians will come together in the traditional Parade to mark the Queen’s official birthday, which usually takes place on the second Saturday in June.

Beginning at Buckingham Palace, the procession will descend through the Mall to Horse Guards’ Parade, joined by members of the Royal Family on horseback and carriages.

Trooping the Color will end with the traditional RAF flyby, watched by the Queen and the Royal Family from the balcony of Buckingham Palace.

Basically – as revealed today – the balcony appearance is limited to working members of his family, with the Duke of York and the Duke and Duchess of Sussex omitted from the royal list.

Prince George, Princess Charlotte and Prince Louis and the Wessex children Lady Louise Windsor and James, Viscount Severn will also be present for the historic occasion.

Pictured: Workers are seen on scaffolding as preparation for the Queen’s Platinum Jubilee weekend continues on Friday

The UK’s long tradition of celebrating royal jubilees, weddings and coronations with the lighting of beacons will continue to mark the Platinum Jubilee.

Beacons will be lit across the UK, Channel Islands, Isle of Man and UK Overseas Territories.

For the first time, beacons will also be lit in each of the Commonwealth capitals to celebrate the Queen’s Platinum Jubilee.

On Friday June 3, a service of thanksgiving for the Queen’s reign will be held at St Paul’s Cathedral. The service will include Bible readings, as well as prayers and hymns that will be sung by both the choir and the congregation.

During the service, the church bell, named Grand Paul, will ring. It was made in 1882 but fell silent in the 1970s due to a broken mechanism.

It was restored in 2021 and has rung eight times since then. However, this is the first royal occasion he has been stunned on.

More than 1,400 marching soldiers, 200 horses and 400 musicians will come together in the traditional Parade to mark the Queen’s official birthday, which usually takes place on the second Saturday in June. Pictured: Trooping the Color parade in June 2017

The Palace Party will be the main event on Saturday June 4, but as part of the weekend’s central celebrations, Epsom Downs Racecourse will stage the 243rd running of the Derby.

On Sunday June 5, over 60,000 people will mark the Jubilee with their very own Big Lunch event.

Every year since the idea began in 2009, The Big Lunch encourages communities to celebrate their connections and get to know each other better, coming together in the spirit of fun and friendship.

In 2022, The Big Lunch will bring Jubilee celebrations to the heart of every community.

People are invited to share friendship, food and fun with their neighbors as part of the Platinum Jubilee celebrations.

A Big Jubilee Lunch can be big or small – street party or picnic, tea and cake or barbecue in the garden. The Big Lunch gives tips and ideas for organizing an event.

The weekend of celebrations will culminate in the Platinum Jubilee Pageant with over 5,000 people from across the UK and Commonwealth and will take place against the backdrop of Buckingham Palace and the surrounding streets.

The UK’s long tradition of celebrating royal jubilees, weddings and coronations with the lighting of beacons will continue to mark the Platinum Jubilee. Above: A lighthouse lit in Edinburgh during the Queen’s Diamond Jubilee in 2012

A general view of the Gold State Coach, at the Royal Mews, Buckingham Palace, London, on Friday 6th May 2022

It will combine street arts, theatre, music, circus, carnival and costume and celebrate the service of Her Majesty’s reign, while honoring the collective service of people and communities across the country.

The bells of Westminster Abbey will ring to mark the start of the pageant, as they did on the day of the Queen’s coronation.

In doing so, the Queen’s Household Cavalry Mounted Band will lead the Gold State Coach along a crowded route back to Buckingham Palace.

Made of gilded wood, a thin layer of gold leaf on wood, the Queen’s coach is seven meters long, weighs four tons and stands 12 feet high. Due to its weight and suspension, it is only ever used at a walk.

Drawn by eight Windsor Gray horses, the grand carriage, led by the Household Cavalry Mounted Band, will begin the spectacular finale of the Pageant Carnival on Sunday June 5 as the procession weaves its way along the nearly two-mile route .

Over 10,000 people will be involved, including military personnel and over 6,000 volunteers, artists, key workers and 2,500 members of the public.

Well-known celebrities from music, film, sports and the arts will also take part in the competition, while the armed forces will play a key role.

A total of around 1,800 military personnel will be there representing the Royal Navy, Royal Marines, British Army and Royal Air Force.

Adrian Evans, Pageant Master, said: “Everywhere you look, in the gilded carvings and painted panels, in the uniforms of postilions, grooms, footmen, attendants and mounted guards, there is a rich tradition and history .

“It will be a unique spectacle that we have the privilege of opening the Pageant with which it will set the tone for the many, many spectacular venues to come.”