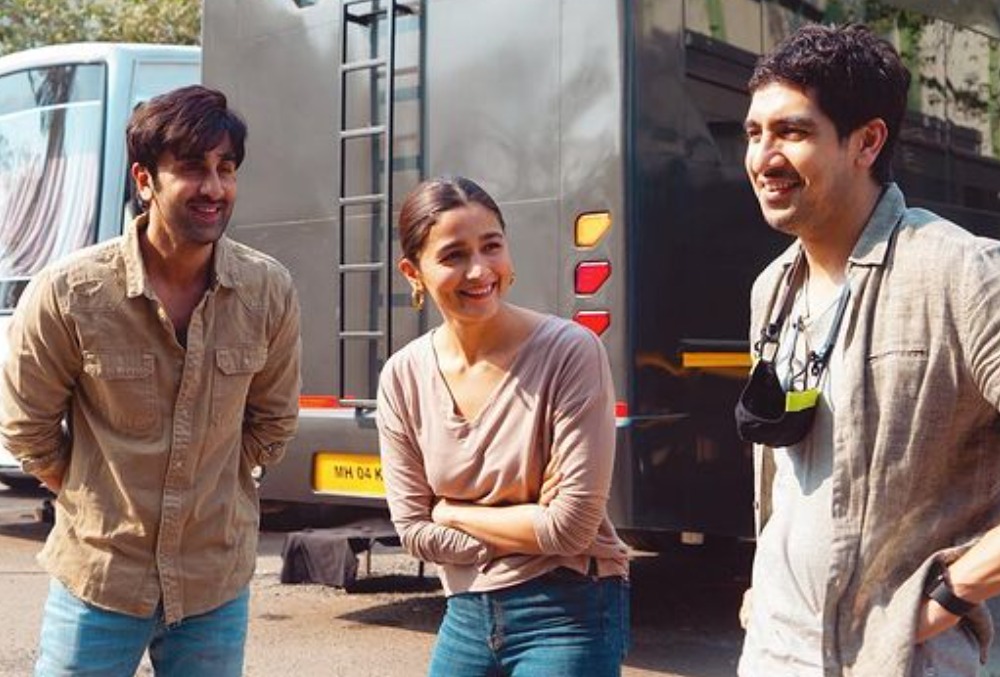 The ‘Brahmāstra’ team brings their ‘most special’ project to the public

Ayan Mukerji has evolved as both a filmmaker and a human being while giving a decade of his life to ‘Brahmastra’, which in his words is an attempt to bring a never-before-seen cinematic spectacle to Indian audiences.

The first installment of a planned trilogy titled “Brahmastra Part-1: Shiva” is released today starring real husband and wife Ranbir Kapoor and Alia Bhatt and according to this young director, “Brahmāstra” is unique for two reasons: technology and Spirituality.

“We wanted to create a great cinematic spectacle, an entertainment space that has never been done at the Indian box office. However, there were two things to it: one, we had to create modern technology to really create an experience never seen before for our audience and I think we have been successful in this endeavor as it will be seen how we have taken technology to the next level for Indian cinema with this film,” the filmmaker told the reporter.

Ayan also highlights how he ensured that the foundations of this film were based on Indian culture. “I believe that the spiritual angle is very strong in the film. I am very proud that when someone outside the world sees this film, they will see it as a very original Indian film that has been created. I hope that people will feel the same after watching it,” Ayan says.

When this young filmmaker reached the press conference venue with the film’s other two strongest stalwarts as part of the promotional strategy, he made sure no greeting was left unanswered or unaddressed. However, what was fascinating to see was how these three young faces, who represent modern Indian cinema, created a magnum opus deeply rooted in Indian culture and mythology.

“I want you all to be proud that this film celebrates Indian culture, roots and traditions and will always be remembered by the world for its originality,” says Ayan as he opens the curtain to face questions from reporters. . waiting.

But before he did, there was a surprise for the Delhi media.

“After today the movie will be released worldwide and the best way to take you to ‘Brahmastra’ is to show you the movie,” he says and adds, “We want to show you some clips from the movie because it’s is completely ready now and I want to take you all to experience 3D to bring the visuals of this movie to life because the whole process was complex and the technical aspect of the movie is a big pillar so I’m very very looking forward for you to experience.”

The filmmaker says that being a fan of SS Rajamouli and Hollywood director James Cameron, he wanted to create an equally majestic universe for the Indian public.

“My film gurus in the world are two: SS Rajamouli and James Cameron and during the making of this film I used to think that if I worked hard now I would probably be able to create something as amazing than them, so that passion really drove me forward and I’m really happy for everyone to see what we’ve achieved in the whole movie,” he says.

It is not only the filmmaker who grew as a person while making this film, but Ranbir Kapoor also grew as an actor while working with him. “I’m very lucky to have had the chance to work with this man, who is also my best friend. I don’t know if I won’t have the chance to work on a project as important as this and it that’s why I want to thank Ayan for considering me for this role.”

For the actor, who starred in Ayan’s latest films including ‘Wake Up Sid’ and ‘Yeh Jawaani Hai Deewani’, history, spirituality, Indian roots and gods are something he describes as spectacular in their latest film. “We often talk about commercial cinema, VFX, etc. but in this film, I understood everything.”

Alia also had the same feelings for her filmmaker friend.

“I was a fan of his as a director and it was by chance that we became friends along the way, so when he casually mentioned me in 2015 that I’m coming to you with my next film, I was like when can I start shooting? I believe in his vision. I think he’s extremely unique and I think my friendship with Ayan is a very shared passion for movies and cinema.

Also starring Amitabh Bachchan, Nagarjuna and Mouni Roy, the early booking of the film has already set records and critics are hoping this film will break the deadlock at the Hindi cinema box office. However, Ranbir thinks it’s not acceptable to take these numbers seriously until the time audiences watch the movie, which is today.

“This film is made for the public and I think we will know on Friday how successful we have been in our attempt to show something extraordinary,” says the soon-to-be-dad actor.

Ranbir remembers when his father, the late veteran actor Rishi Kapoor, was alive and the young Kapoor used to hide the fact that he was going to shoot the same movie for so many years.

So does this mean that Ranbir is now looking forward to doing more projects like this in the near future?

To this he says he cannot predict this. “You have to choose from all the opportunities that come your way. That said, it has truly been an honor and a privilege to be in his films and to be in Ayan’s films, as he was instrumental in my growth as an actor, I have known him since 2008 when he told me the script for “Wake Up Sid” I feel the energy of this young filmmaker, he is passionate about work and character and I think art is about energy,” he says.

Addressing the boycott culture trend, the team says they want to keep it positive.

“I had a movie release a week ago called ‘Shamshera,’ and I didn’t feel any negativity. If the movie didn’t do well at the box office, it’s probably because the audience didn’t like the movie,” Ranbir says and adds that if the content is good, audiences would love to see it in theaters. “Who doesn’t want to go to the movies, to the cinema and experience different emotions and be moved by the character.”

Alia also sums it up by saying that it’s a beautiful environment to release any movie and we should all focus on the healthy, happy, and safe space we live in. “We should all feel grateful for the life we ​​have in general and we should celebrate the return of cinemas and the return of films to theaters,” she concluded the session, singing “Love Storiyan” from the film for the audience.