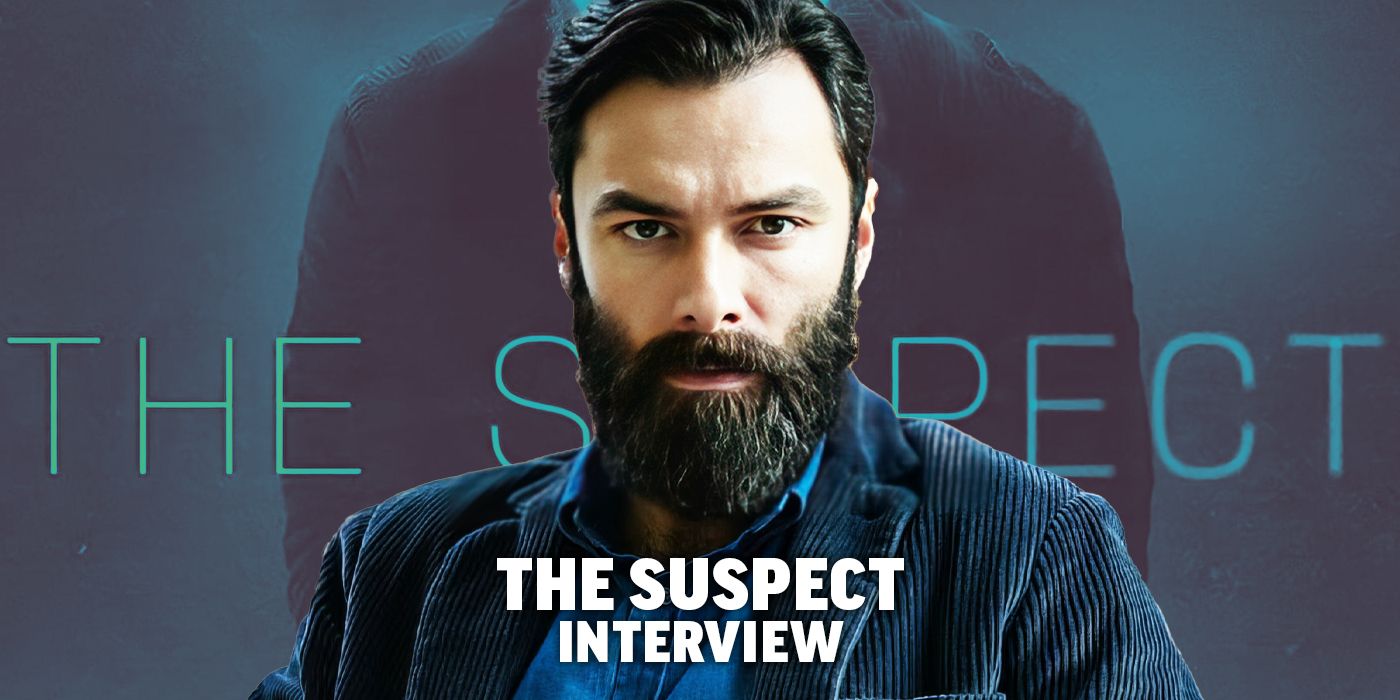 [Editor’s note: The following contains some spoilers for The Suspect.]

The thriller in five episodes The suspectavailable to stream for Sundance Now and AMC+, follows Joe O’Loughlin (Aidan Turner), a clinical psychologist with a successful practice and a loving family who becomes something of an online hero after rescuing a young patient who was about to jump off a ledge. The attention he received from the incident puts him on the radar of a veteran police officer and his partner, as they investigate the murder of a young woman found in a shallow grave in a cemetery, but asking for his help reveals suspicious behavior that makes them wonder what he’s trying to hide.

During this one-on-one interview with Collider, Turner talked about how he sought to do a project like this, what he loved about the way this story is told, never wanting to deceive the audience, shoot a scene that meant being multi-story when you’re dizzy, and if he’d like to see that character again, because there’s more books in this series by Michael Robotham. He also talked about what drew him to the upcoming series. Fifteen-Lovewhich will air on Prime Video.

Collider: I love these kinds of stories. It’s the kind of stuff I love to read and watch.

AIDAN TURNER: Yeah, me too. I’ve been waiting for one of these for a while. I read a few and thought it was easy for these things to fall into the pattern of being pretty formulaic. And then I read this and there were two episodes when I thought, “I still can’t figure out who this guy Joe is. It’s weird. I love it.” It’s messy and difficult and muddy and unclear, in a good way, and it got me thinking. I’ve been waiting to do a show like this.

One of the things I really love about all of this is that every time you think you figure out what happened and who’s responsible, you realize you have no idea. . You can’t just kick someone out and then move on to the next suspect because you keep going around and back and forth with certain characters. There were times when I was convinced your character didn’t, and other times I was convinced he did.

What did you think of how it all turned out in the end? Once you found out exactly what happened, what was your reaction?

TURNER: I wanted it to last longer. That’s what I was fighting for. If you were a fly on the wall in all those early meetings, I kept saying, “I love that ambiguity so much. I want more. When we know who did it, Joe is no longer the suspect, unless you think there’s a huge deception with the public, and there’s some sort of trick or trick that doesn’t probably isn’t satisfying for an audience, to be honest. He goes from suspect to detective.

I like its ambiguity the most. I would push for it to be longer. I wish we were in episode four and still going, “What’s going on?”, because that works well for me. But the producers said, “I think we ran out of steam with Joe.” He is fascinating and he digs holes in himself, everywhere. It starts with what seems like a pretty innocent transgression, but then it snowballs into something else, and he tries to cover it up. And then that thing comes out and he tries to cover something else. It goes on and it goes on. The response from the producers was, “We can’t keep doing this. You can’t do that to an audience. At some point, you have to make that shift, and you have to turn.

I love it, and it’s fun to play. It’s also fun to play on the other side, when he puts on that detective hat. Admittedly, as a reader, when I first read the scripts, I thought, “Oh my God, I like not knowing.” What does a liar look like and what does he look like? Sometimes people who are completely innocent don’t always look that way, and our opinions of what the innocent and guilty look, look, and walk aren’t always accurate. I’m a big fan of true crime. There’s a lot of shows where you’re in an episode and you’re like, “Oh, my God, he’s guilty. Come on, it’s so obvious. And then, the next episode, you say to yourself, “If I were on a jury, I couldn’t convict this person.”

I like this. I like how it makes me feel. I don’t know why, but it’s fun. Especially in theater because you’re not on a jury and you’re not playing with someone’s life. As a viewer, we’re in this safe territory where we can go on, “Why did he do that? He said that, but what is the reason? I like this. I like that in shows. It’s the kind of TV I like to watch.

We realize pretty early on that this guy knows more than he initially lets on, and then he does those things and makes those decisions that make him seem more suspicious or guilty than if he had just handled something a little differently. Was it all on the page? Did part of that behavior and the way he was come from the choices you made, as an actor, just to make him feel like he was hiding something?

TURNER: No, definitely not. In those early discussions, I was adamant about following Joe’s truth. You can’t fool the public. We can’t make him look guilty, just for fun. On second viewing, all of this must be followed. I knew Joe’s background. I knew his truth. I knew why he was floundering and why he was getting nervous, or saying a particular thing, or feeling such and such a thing. Everything is tracked for me. I never performed for the camera, or performed for an audience, or tried to add a twist or a twist that didn’t feel authentic. So, yes, it was still on the page. That was the big thing. It was already on the page. He says these things and makes these mistakes. If you shred something, how do you dispose of it afterwards? If someone asks or needs to see something, how will you explain it? That’s what Joe tries to follow, all the time. Is it just because of the trauma of his recent diagnosis, or is that the person he is? What affects it? What is he trying to hide? What’s just impulsive and a mistake?

You said you were afraid of heights, which makes the opening sequence very interesting. Was it something you knew you might have trouble with? Have you tried to forget you had to?

TURNER: Oh, yeah, 100%. I knew I would have a hard time with this, as soon as I read the very first episode. I thought, “How is this going to work?” We built the top two floors on land. There was no green screen. We had stunt people who were on the 25th floor, or whatever, but I was high enough, enough to have a pretty dodgy ankle, if I had fallen on it. It was high enough for me to make those screams quite authentic that day. I’m not a fan of heights. I never have been and never will be. But if I have to go up somewhere high, it’s good that someone has a camera on me. Then I can show all its glory. That’s what actors do. Sometimes even unconsciously we throw ourselves into things that we find terrifying. I like theatre. The next thing I’m going to do is a play. I love it, but I know there’s going to be two days before we go up where I’m like, “What the hell am I doing here? It’s terrifying. There is a sold out audience. There are 800 people. I don’t know what I’m doing. Why am I doing this? It’s not what I like to do. And then, as soon as that curtain goes up on the first night, you’re like, “Oh, yeah, that’s why.” It’s just something we like to do, as actors, to torture ourselves.

There are other books about this character. Would you like to tell another story with him? Have there been any conversations about the possibility of this?

TURNER: Yeah, there were conversations. I think it would probably be a very different show. I think there’s mileage in Joe and the story and detectives. I shouldn’t talk too much about the second book, but I read it and love it. The third one too, in fact. I’m not quite done with this character yet, but it would be a different kind of show. Listen, I’m not a writer. That’s not what I get paid for, but there are some brilliant people who are. Peter Berry, who worked on our show, is one of them. I’m sure he could write something really satisfying for an audience to see, and for actors to read and want to be a part of. I’m definitely not putting this to bed yet, even though there are no plans, at this time, to do another series. All the actors are busy on other shows now, and so am I, but I’d like to come back to that. It’s something I would like to see again.

You also have Fifteen-Love, which sounds like another interesting story and character. What made you want to do this? Were you a tennis fan before doing this, or is it something you had to learn for the show?

TURNER: So many people in [the UK] are big tennis fans. I’m sure it’s the same in the United States. Once I started touring I realized that people know a lot about tennis and play a lot of tennis. There were really strong scripts. It comes from the same production company as The suspect, World productions. (Show creator) Hania Elkington is actually married to Jake Lushington, who produced The suspect and also produces Fifteen-Love. I was aware of the story. I heard them talking about it. I was like, “I want to read this stuff you’re talking about. Give me the script and let me read it. So, I did, and I loved it. And then we took care of doing it. In fact, tomorrow (October 28, 2022) is my very last day, and I’m ending 16 weeks on it. It was a long shoot. It is quite a dark material that we cover in it. He’s probably the darkest character I’ve played to date. It was amazing to work on and an amazing show to do.

The suspect is available to stream on Sundance Now and AMC+.

The 5 Best Payday Loans Near Me