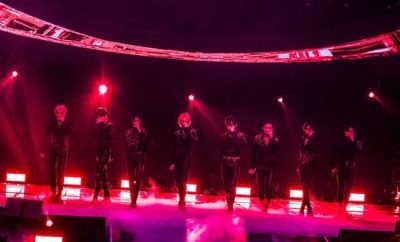 Kick off Stray Kids 2nd “MANIAC” World Tourthe group performed three concert dates from April 29 to May 1. On the last day, the concert was also broadcast on the Beyond LIVE platform.

As a result, the face-to-face gigs stage the band’s return to the concert scene after two years and five months since “District 9: Unlock.”

All seats were sold out quickly, and even limited-visibility seats were opened, proving the band’s ticket-selling power.

The title of the tour is derived from the main title of Stray Kid’s 6th mini-album, odd released on March 18 this year. A well-thought-out and well-prepared setlist was presented, extolling the group’s charms and uniqueness.

Kicking off their opening scene Bang Chan, Lee Know, Changbin, Hyunjin, Han, Felix, Seungmin, and IN pumped up the crowd with “Maniac,” “Spider Web,” “Easy,” and “ALL IN.”

The performance of “Red Lights,” a unit song by Bang Chan and Hyunjin, from the Noeasy 8-member album, warmed up the crowd even more.

Greeting the fans, the members were all happy and grateful to have reunited with STAY after a long wait. They assured fans how they prepared for the stages to share the fun and excitement.

Afterwards, Stray Kids continued their explosive performances with fan-favorite tracks such as “Back Door” and “Side Effects” along with other popular songs from their previous albums.

As a result, the scene featuring 15 songs as well as the band’s session got the crowd excited which matches the band’s energy.

Dressed in traditional hanboks, the Stray Kids look like Joseon young masters with irresistible charm. They went on to rave about performances of “Thunderous”, “DOMINO” and “God’s Menu” in the live band version.

Afterwards, unit scenes ensued where Bang Chan, Reno, Seungmin, and IN sang STAYs along with the sweet ballad “Waiting For Us.” Next, Changbin, Hyunjin, Han, and Felix showed off their hip and stylish charm for “Muddy Water.”

Towards the end of the concert, Stray Kids showed no restraint in bringing frantic moments through their music.

Stray Kids had a significant time hearing the screams of the live audience after a long time. The audience responded with loud applause and cheers to their performances on stage.

At the end of the three-day concert in Seoul, maknae IN shared how much the group wanted to be on stage.

“The stays are like the water of life for us. Thank you for giving us a precious moment that we will never forget, and thank you for always being by our side.

Chef Bang Chan said, “It’s been 10 years since I came to Korea. There were times when I was alone, but I was able to get this far thanks to my limbs and my STAY, who always comfort me. I want to say thank you. As a more reliable leader, I will always be by your side. I like You.”

Meanwhile, Stray Kids, who successfully completed the Seoul performance, are preparing for their world tour. They will visit key cities in the United States and Japan from June to July.