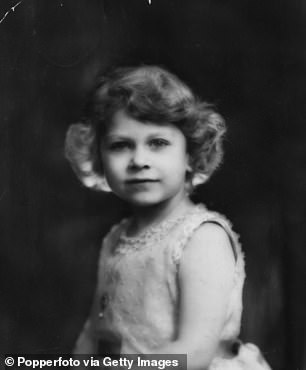 Royal fans have gone wild over how Princess Charlotte looks like her great-grandmother the Queen in a new photo.

The Duke and Duchess of Cambridge, both 39, delighted fans yesterday by sharing a family portrait taken on a secret trip to Jordan earlier this year.

Royal fans rushed to point out family similarities, noting how often Princess Charlotte looks like her great-grandmother, the Queen.

One of them commented: â€œCharlotte looks exactly like the Queen! So pretty and composed.

Meanwhile, another wrote: â€œCharlotte is the queen’s doppelganger. Beautiful children. ‘

The Cambridges appear with their three children in the family photo. Kate looks radiant in a khaki dress, while Princess Charlotte looks all grown up as she perches on a stool in a gingham dress by Mango.

Prince George beams as he poses in a Â£ 14.95 camo tee from GAP and gray shorts.

Meanwhile, Prince Louis sat cross-legged at the front in a striped Â£ 32 Rachel Riley’s polo shirt – a larger version of the top that the brand’s Prince George wore during an official visit to Taronga Zoo in Sydney when he was nine months old. old, as well as slip-on slip-on sneakers from Hampton Canvas, which were worn by both her older brother and sister.

Royal fans were blown away by Princess Charlotte’s eerie resemblance to her great-grandmother.

One of them wrote: “Nice picture, Princess Charlotte is just the image of the Queen.”

A second commented: “Magnificent royal family, Charlotte is the mirror image of the Queen.”

Another added: “I see the Queen in Charlotte a lot!”

It was not revealed exactly when the family traveled to Jordan, but the visit likely took place towards the end of the year when travel restrictions were relaxed.

During the summer, Jordan was placed on the Amber List, meaning that after July 19, fully vaccinated arrivals in the UK did not have to be quarantined, provided they passed a HIV test. pre-departure and a PCR test on the second and eighth days after returning home. . On October 4, the pre-departure and eighth day tests were abandoned.

The Cambridges’ Christmas card deviates from their usual offering, which in recent years has been family photos taken at their Norfolk home, Amner Hall, with a distinct English country feel – with matching comfy sweaters and boots to match

No details of the visit would have been released to the public at the time as it was a private family vacation, rather than an official royal tour.

The Cambridges’ Christmas card deviates from their usual offering, which in recent years has been family photos taken at their Norfolk home, Amner Hall, with a distinct English country feel – with matching comfy sweaters and boots to match .

The Duke and Duchess of Cambridge are seated in the center of the photo, smiling broadly.

Kate, her long brown locks falling in curls over her shoulders, has one hand resting on her husband’s knee, the other arm around eight-year-old George, who is sitting to her left.

Clearly laid back, the mother-of-three wears a three-quarter-sleeve button-down dress that cinches at the waist. The dress appears to be long and falls well below her knees.

Next to her, a tanned Prince William is dressed in a khaki polo shirt, beige shorts and suede moccasins. He has one hand on his wife’s knee and the other arm around his daughter, Princess Charlotte, six, who is to his right.

In front of the couple smiles Prince Louis, who wears navy blue sneakers to match his sister’s.

The Duke and Duchess of Cambridge shared the photo on Instagram with the caption: “Delighted to share a new image of the family, which is on this year’s Christmas card.”