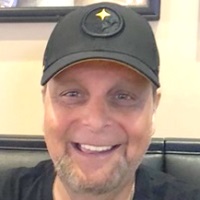 Ronald Eugene Aglio was born on January 14, 1960 in Charleroi and died on March 11, 2022 at 7:05 a.m. Earth time, at the age of 62, after a brutal four-year battle with cancer. Ronald also went by “Ron”, “Ronnie”, “Uncle Ron”, “Uncle Ronno” or “The Wizz”. Ron grew up in Monongahela with his father, Joseph; his mother, Mildred; brother Joseph; and her sisters, Marcee and Kate. He attended Ringgold High School and graduated in 1976. Ron was a hard worker who was dedicated to making his name known, especially in the music industry. He created Wizzard Productions and was one of Pittsburgh’s top DJs for many years. Ron would run a successful entertainment management company known as NME and was known for his role in the Royal Jelly Group. Ron was so incredibly proud of what Royal Jelly had accomplished over the years and everyone who knew him heard a lot of stories. In the early 2000’s Ron chose to move to California where he pursued his passion for life and made so many friends along the way. He was able to spend years making memories with his brother Joe and being an uncle to his nephew, Dustin and his niece, Taylor. Although he loved California, he always remembered where he came from and never stopped talking about Pittsburgh or, as he would say, “Back East”. Ron was the ultimate Pittsburgh fan. He loved watching the Steelers and Penguins, especially with his friends. He grew to love the Lakers and was a huge Kobe Bryant fan. Ron loved riding motorcycles, sitting at the bar drinking a Rolling Rock and was the ultimate storyteller. He could fit in anywhere and his zest for life could be seen from across the room. He also loved his dogs, Marcus, Mario and Vito, with everything he had. Ron was the most loving, brave, faithful and passionate person. He proved to each of us that he was a real superhero who deeply loved the Lord and trusted his process every moment of every day. Ron was predeceased by his father, Joe; mother, Mildred; and his brother, Joe, who he says gave him the strength to keep fighting, along with everyone who loved and supported him. Ron never wanted to give up. Ron cared deeply for his family and friends; they really meant the world to him. Living to share his memories are his niece, Taylor, his wife, Alex, and their daughter Keola; with his nephew, Dustin, his wife Maria, their son Xavien and their daughter Aurora; his niece, Sierra and her two children; and his cousin Joanne. He will also be missed by the best caregiver and one of his best friends, Tom; his godson, Bailey; the entire Miller family; Dave Beard; and Janet, whom he called his daughter! He will also be remembered by countless other friends and colleagues who will miss him deeply! The celebration of life for Ron Aglio will start at 6 p.m. on Friday April 8, 2022, at the Baker’s Pub in the North of Charleroi to share stories and toast in a place that meant so much to Ron! All are welcome and encouraged to join us! On Sunday morning April 10, family and close friends will gather for a small service and prayer as part of Ron’s wishes; this event will be closed to the public. In conclusion, the celebration of life, family, friends and those who loved Ron will come together on Sunday afternoon, April 10, at Four Points BBQ and Brewing at 1 p.m.! Here we will come together in prayer, fellowship, and listen to family and friends talk about the incredible life of Ron Aglio. We would love to see as many people as possible join us in celebrating Ron’s love of life and the joy he has brought to so many of us! Four Points BBQ and Brewing’s address is 308 Fourth St., Charleroi. We hope to see you there! “Life is short, break the rules, forgive quickly, love honestly, laugh easily, keep it simple, ride often, ride FREE and never regret anything that makes you smile!”