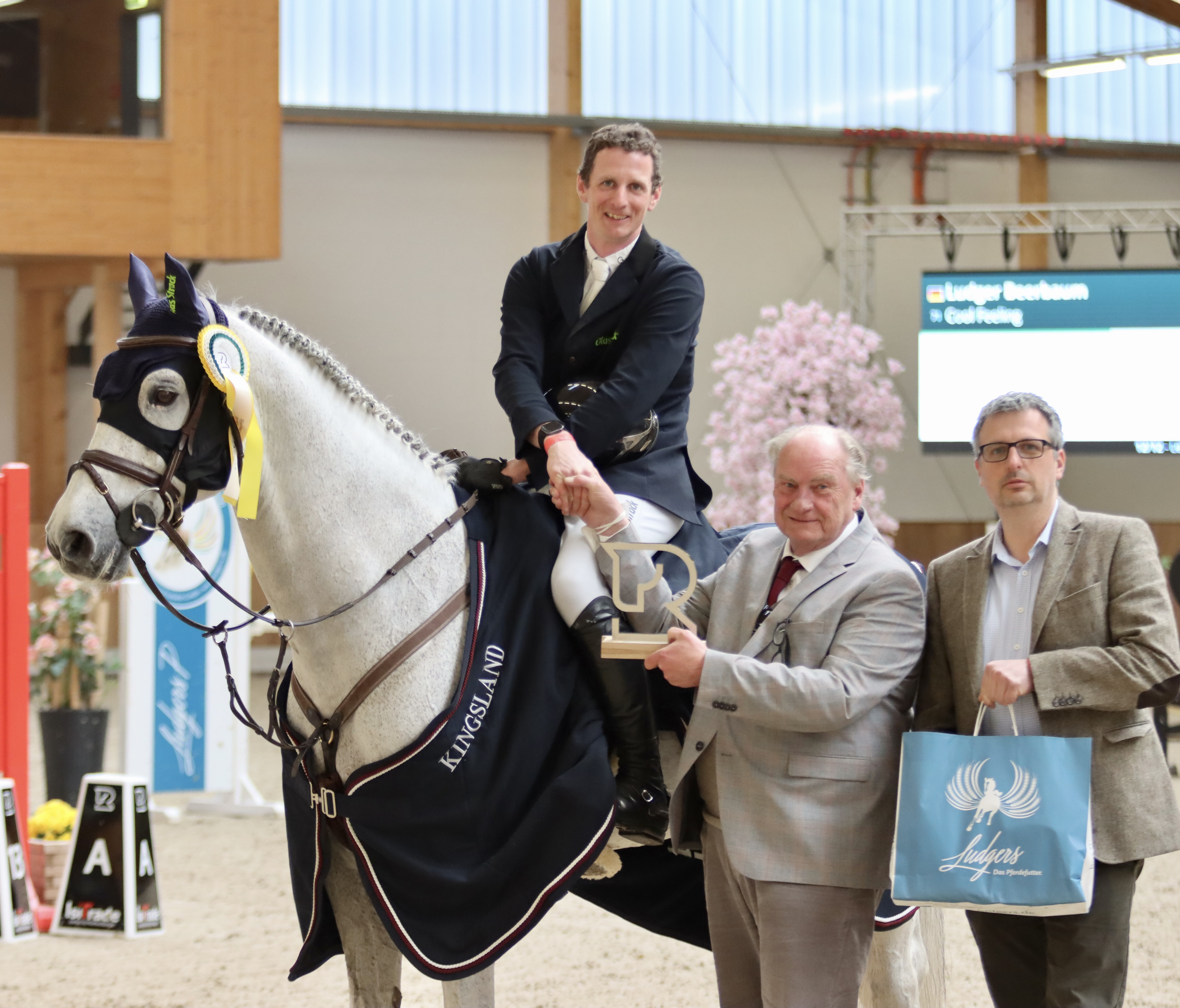 When he can show his horses at the stallion competition, Ludger Beerbaum is just as much in his element as when he himself is in the saddle. During the “Stallions in Training” presentation at CSI** Riesenbeck International, host Ludger Beerbaum gave insight and information on nine stallions from his station in front of several hundred spectators with wit and a lot of expertise.

In a playful way, Beerbaum explained the respective pedigrees, character traits and performance levels of the bulls and, together with his riders, showed what the daily work of four- to ten-year-old sport horses looks like at the Beerbaum stables. With lots of praise – “it’s really fun to watch here, great! – and almost staged as a lesson, new rider Philipp Hartmann introduced the young stallions Aberdeen Z (Aganix du Seigneur x Canturo) and Cortez FZ (Cornet Obolensky x Canturano I) with a lot of feeling. Zinedine, now 18 years old (Guidam x Heartbreaker), was presented in hand. The chestnut stallion – “one of my most beautiful sport stallions in go up” – can point to many great products. One of them, Zineday, is currently competing with Philipp Weishaupt in the Wellington 5* competition.

Five-year-old Forlee (For Pleasure x Comme il faut), son of successful breeder Ottmar Eckermann, whose daughter Katrin Eckermann is one of the best Amazons in the saddle, is one of the station’s stallions who have bred the most mares in the 2021 season. The youngest of the stallion group, three-year-old Emeron (Emerald van t’Ruyterhof x Ahorn), has yet to show jumps in the show. He impresses with his accuracy, pedigree and inner attitude.

A whole series of very talented young foals of the presented stallions gave the breeders on site a visual impression of the beautiful offspring of sport horses. Older sport stallions under the saddle of show riders Christian Kukuk, Holger Wenz and Noora Forstén formed the conclusion. The already successful and very successful in the sport Like the father (Comme il faut x Contender); Coros – he is the 2021 world champion for six-year-old show jumping horses (Cornet Obolensky x Arpeggio). Philipp Weishaupt was live from the USA to describe his success story with the stable star. Chubakko (Connor x Colmann) then let the public discover during a training session how the horses are prepared for the great international sport. Finally, Mumbai, member of the Olympic team and vice-champion of Europe with the 2021 team (Diamant de Semilly x Nabab de Rêve) distinguished himself in dressage – to then start under the saddle of his rider Christian Kukuk in the Riesenbeck Grand Prix in real competitive sport. After this program element, those present could immediately turn to big sport. Of the 37 riders qualified for the Grand Tour final, 14 again qualified for the final jump-off with a clear round.

Ludger Beerbaum likes to present his horses – but he prefers riding even more. If it is then also successful, then even much rather! With Cool Feeling, he was the last rider in the jump-off to really step on the gas. He remains clear (0/40.40) and takes third place. Felix Haßmann and his Cayenne again wore the winning pants and won (0/39.75) ahead of Irishman Jeremy Sweetnam (0/39.96), who had Brown Star under the saddle.

Mumbai, previously presented to the public as a stallion at Beerbaum station and highly regarded by his rider Christian Kukuk, finished fourth. The gray stallion still has international competitions on his schedule in the coming months. Still, Christian Kukuk’s goal for 2022 is clear: “I would like to go to the World Championships in Herning with Mumbai.”