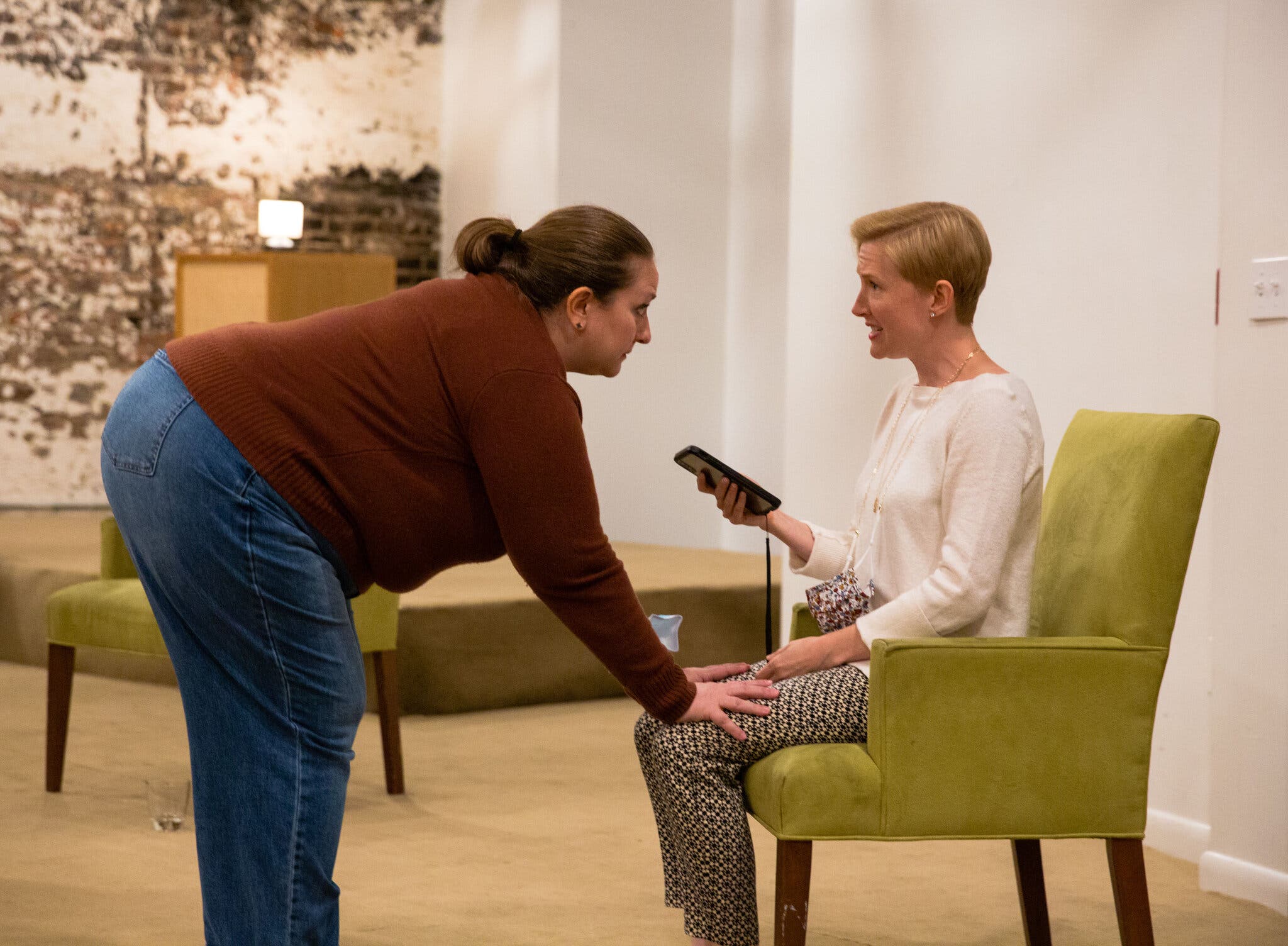 Review: ‘White on White’ Teaches Audiences How to Accept Discomfort

It is a truism to say that race is a social construct, but the fact that it is a construct does not make it any less real. Rather, it’s often something you ignore at your own peril, like a flashing blinker, especially if you’re not white. This idea is something members of an all-white anti-racist affinity group in playwright Robert Quillen Camp white on white grok on a intellectual level – they make all the appropriate overtures to be “wronged” and “accomplicated” in the wake of Kyle Rittenhouse’s acquittal – but unconsciously they are at sea, striving to meet the shoreline of their innermost selves.

The meeting begins innocently enough; NPR’s painful background noise makes us eerily think we’ve walked into a co-op board meeting, with its needed popcorn and fries on a table that’s been requisitioned for the reading of the lawsuits- verbal. As they walk, some audience members trail behind — no, actually, they’re actors all wearing masks and greeting Hannah (Niki Sturgis) with an energetic little chat. Seb (Heather Cunningham) breaks the ice with news of flooding and “real sewage” in his basement, and the moms in the group empathize with their kids’ online learning. So far, so real. white on white, at the risk of sounding like one of the egg-heads of the group, uses the rhetoric of sincerity, confusing the promises of white people “to step in and do something”, to “join the fight”, all promising not to stray too far from the truth. Or does it? Granted, the cast (directed by Alec Duffy and Lori Parquet) perfectly mimics the hydraulics of breakout meetings so that when two of the characters park a large chest at the side of the room, we hardly give it a second thought. And there’s the housekeeping that almost numbs us into complacency: a quick poll is taken on masking/non-masking and since everyone is vaccinated, the latter wins.

It’s when the characters close the circuit with the rest of the audience, seated in concentric circles, that our assumptions about stilted protocols begin to crumble. Seb leads the group through a sequence of songs about understanding, ships and “wires and trees” while Riley (Dinah Berkeley), whose pronouns are they/them, accompanies these tunes on an autoharp. While it’s not entirely accurate to say that these performances send us through an emotional trap (Camp is too subtle a writer for that), they inescapably recalibrate our expectations for the tense, thrillingly paced psychodrama that unfolds. . Your scary mileage may vary. Those familiar with Camp’s bizarre work—particularly his “All Hands,” about outrageous secret society rituals that put “cult” in “occult”—will likely be less surprised (spoiler alert!) at the ball of flesh that sparkles of one of the characters. It’s not just body horror for fun, and it’s not the most unsettling thing to manifest in this sleek 95-minute production: once Hannah “extrudes” the pound of flesh, Michelle ( Rebecca Mozo), the de facto whiteness doula, informs him that this is an amalgamation of white privilege and pure power. It turns out that each of the characters has expelled similar bullets in the past, which they gradually reveal as a sordid secret. Chewing on the gelatinous rice balls (go ahead) makes Hannah and Michelle feel “like a straight cis white man”, “with a gun”, “with an army”, “with a knife between their teeth”. It also appears to have aphrodisiac effects on the eater, and draws its power vampirically from nearby people. One bite imbues Hannah with a surge of libidinal energy while sending Henry, the pleonastic professor played by a formidable John Lenartz, into a naked climax. If this all seems a bit excessive, maybe it’s by design. We are firmly rooted in the land of unheimlich here, “the stuff that’s over there, cooked,” as O’Reilly, a mechanic played by Peter Mills Weiss, puts it. Camp, who wrote his doctoral dissertation on the Freudian strangeness in the plays of Maeterlinck and Strindberg, seems to have been particularly inspired by the Freudian notion of drives as operating fundamentally at the level of excess or surplus which goes beyond the individual will and which leads to ruptures in our distinctions of self and other, subject and object, individual and group.

Things get complicated (even more intoxicating) when Hannah’s husband, Peter (Brandt Adams), interrupts the exorcism, born congress against racism. He could be a character from a lost novel by Shirley Jackson; the first time he shows up, in beige pants that match the carpet, an aura of doomed wallflower accompanies him. As he chats with Henry and O’Reilly, the sound of a muffled heartbeat threatens the conversation (Jeremy Toussaint-Baptiste did the sound design.) The feeling of dread only intensifies later, when , returning from a fruitless search for his lost daughter, he confronts Henry and the others for desecrating his home with spilled snacks, discarded clothes, and bloodstains: the writing is everywhere except on the wall. What begins as distrust in the face of disagreement – ​​O’Reilly calls all white people racist, while Peter hesitates – turns into a bizarre referendum on the hoarding of privileges by parents who decide not to send their child to a “diverse” school. White fragility, indeed. To quote Tennessee Williams incorrectly: they are all “kids in a sprawling kindergarten, trying to spell the name of racism with the wrong alphabet blocks.” Except the stakes here are much higher.

There is a sense of Borgesian “unreality” throughout. I remembered in particular the Argentine writer’s great short story “The Secret of the Phoenix”, which revolves around the open secret of human sexuality, rendered a non grata concept. The “secret” automobile that works is the tension between what everyone knows and what no one likes to talk about publicly. The secret animation white on white is even more shameful and repugnant, revolving as it does around the collusions of white power and all that hemisphere. The specular quality of Hannah’s name – a perfect circle, you might say – begs the question of who might see themselves in her, or Riley/O’Reilly, or any of the other characters. As an Asian I sometimes felt strongly like an intruder, at other times like watching illegally obtained footage of a bribe in progress. For a certain type of viewer, I can imagine this feeling – and I say this in the best way – like a much-needed shot in the arm that makes you sick enough for certain experiments for your moral sanity. Yet even this connecting line—white on white: a vaccine against cultural suicide – does not do the piece justice. As Moby-Dickthat exuberant “wicked book” about a single-minded captain’s pursuit of a great white whale that Henry can quote at length, white on white integrates so much into its big belly of piece: school desegregation, armed violence, the decolonization of departments, the will to dominate, the discursive production of knowledge, the problem of whiteness as ideology – and we have only scratched the surface inflamed epidermis. What the poet Charles Olson said of Melville’s canonical novel is perfectly true here too: “It’s America, all its space, the wickedness, the root.”