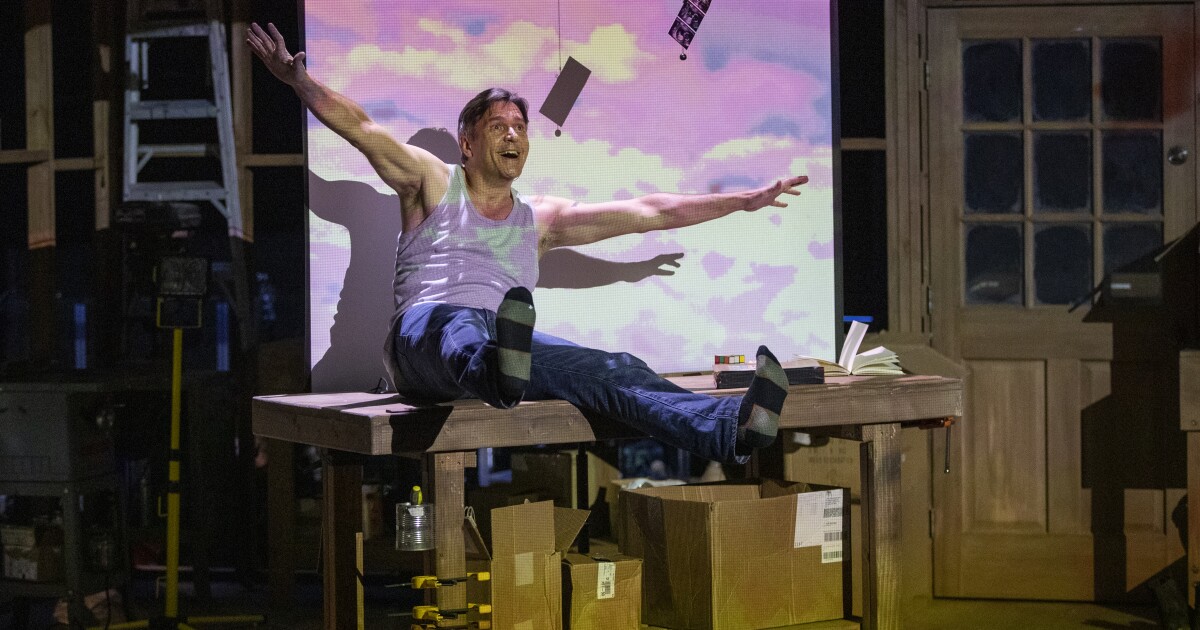 Review: Taking the Agency in New Operas ‘Everything Rises’ and ‘Daughter’s Eyes’

Two new one-act musical theater monodramas had their world premieres in Santa Barbara and Los Angeles on Tuesday and Wednesday, respectively. Although unrelated, each was an inspiration and agency act of a well-known baritone. Gender is on the table, as is race and personal transformation. Each has been individually in development for the past five or six years. Each is structured as a kind of drama song cycle.

The timing of the premieres, which included delays due to the pandemic, was entirely coincidental if you believe in coincidence. I do not know. They are anything but tailor-made to be ridden together in one evening.

“Everything Rises,” which was commissioned by the UC Santa Barbara Arts & Lectures series, is a personal project by Davóne Tines and violinist Jennifer Koh, with an all-BIPOC crew, that experimentally explores ancestry and inclusiveness. A slightly more conventional opera “In Our Daughter’s Eyes” by Du Yun was created for Nathan Gunn. Its REDCAT Wednesday premiere was by the Los Angeles Opera for its Off Grand series and has performances through Sunday.

The seemingly old-fashioned issue of “In Our Daughter’s Eyes” is masculinity. When asked about manhood in the 21st century, Du Yun said in an interview after the show, “I don’t know much about it, and I kinda don’t care.” The composer then added that she loved her father, whom she credits for being a strong role model.

With a libretto by Michael Joseph McQuilken, who also directed the production, the opera is a father’s letter/diary recounting the birth of his daughter. A spellbinding character who enjoys airplanes, partying, drinking, and tinkering in his man-cave workshop, he is forced to confront his superficiality when his wife’s pregnancy begins to go awry. Catharsis leads, with a theatrical twist, to epiphany.

Without spoiler, I dare not say more than “In Our Daughter’s Eyes” is based on real life and is supposed to bring us unexpected tears. It also brings the Kafka-esque Du Yun into atypical melodramatic territory. His Pulitzer Prize-winning opera “Angel’s Bone” is a musical mad dash that revolves around the sexual exploitation of angels who return to Earth and become slaves. ‘A Cockroach’s Tarantella’, for speaker and string quartet, is about a cockroach’s desire to become human rather than being chewed on by humans. She has contributed quirky and tantalizing elements to the industry’s “Sweet Land”.

But it’s not without its ever-edgy approach, with a thunderous and dazzling score for violin, cello, clarinet/saxophone, trumpet, guitar and percussion. Brilliantly led by Kamna Gupta, it leaves little room for sentimentality.

Gunn is awesome. The opera was his own effort to become a more creative performer and, as a father of five and a recovering alcoholic, it contains elements of his own personality and history. He jumps into each scene, busy as a bee. With the help of projections, her studio willingly becomes the place of surreal dreams, visions of her past, the progress of the baby and her uncertain future. He builds a park while building his own maturity. The vocal lines are robust; singing, exceptionally.

Unfortunately, however, Gunn’s unsubtle baritone amplification exaggerates the nuance to the point of no longer being a nuance. “I’ll be an honest journalist,” he sings at the start of the opera in a disembodied voice over the loudspeakers. Over time, the ear adapts (as the ear does in overly noisy movie theaters) and your brain begins to associate an artificial sound with a real person, but only through mental desensitization. Cut the amplification in half and the opera will be more honest.

Like “In Our Daughter’s Eyes,” the production of “Everything Rises” by Alexander Gedeon (who recently resigned from the Long Beach Opera, citing the organization’s “culture of misogyny” and “racial symbolism”) uses projection , but it is more restrained, more choreographed, more restrained. Koh and Tines take us through their parallel journeys from traditional careerism to becoming themselves. It’s a slow process of enlightenment — sometimes angry, not always understandable, but always necessary.

The production begins with a video clip that can be found on YouTube of Koh at age 17 in a phenomenal performance at the 1994 Tchaikovsky Competition, of which she was one of the first winners.

When Koh takes the stage for real, she’s dressed in a formal silk soloist dress and performs in a single tone with inner-sense authority. Tines also appears in the traditional formal attire he wore early in his career, and describes himself in song as “a moth drawn to wealthy benefactors, a mechanical monkey to sing for their private dinners”. By the end, they’re both wearing skirts and in each other’s arms, free to be themselves.

Ken Ueno’s score is subtly chant-like, serving less to announce itself than to empower performers on their laborious path to self-expression. When the music stands out — as in an intrusive rhythm track to Ueno’s otherwise engrossing arrangement of Billie Holiday’s secret ode to racial justice, “Strange Fruit” — it diminishes.

Koh and Tines’ interviews with relatives bring their background to life. Playwright Kee-Yoon Nahm said their loved ones were characters in the drama. Koh’s mother is seen in large screenings and heard explaining how she chose to emigrate to the United States from Korea when she was 22, but her daughter had no choice but to grow up as a Asian in a non-Asian world. Tines learns of a lynching from a relative, and there are projections of broken branches.

Koh and Tines explain in the program note their need to listen to “resonances across Black and Asian stories” as they raise their voices “ready to speak truths.”

As an “audience enveloped in a cloud of whiteness”, we are invited to meet their gaze and listen to their stories. Campbell Hall on the UCSB campus was not full, and the audience was, as the performers had anticipated, mostly white. Koh and Tines’ stories compel and help explain their sensibilities as outsiders. But the thing is, great artists are by definition outsiders whose purpose is to show us what we otherwise don’t see.

What we notice first about Koh and Tines is their extraordinary communicability. The violin and the voice speak with an eloquence and power worthy of being known. But that, as with all artists, is background. Everything could soar even higher with these resonating stories in the background rather than the foreground. Koh and Tines’ stories made them who they are, but their art should be – and is – big enough to tell us who they are.

It also raises the issue of amplification, which captured every breath Tines took and distorted his loudest passages. For Koh, the slightest sound of the bow touching the strings could be amplified into a major event. Each, however, is a performer whose very presence draws you in. You make the effort. Amplification on this scale does the work for you. Change comes with effort.

Ultimately, however, the most significant change is the maturation of Koh, Tines and Gunn beyond the comforts of conformist concert stages and into venues where real issues can be aired. This is how they earned our trust and why over-amplification is not a matter of trust.

After a second performance Thursday night, presented by the Center for the Art of Performance, UCLA at Royce Hall, “Everything Rises” will likely go to New York, but nothing has been announced. “In Our Daughter’s Eyes,” produced by Beth Morrison Projects, will go to New York’s Prototype Festival in January 2023, as Morrison announced from the stage. After that comes the opportunity for a savvy presenter to book the operas together.

“In Our Daughter’s Eyes”