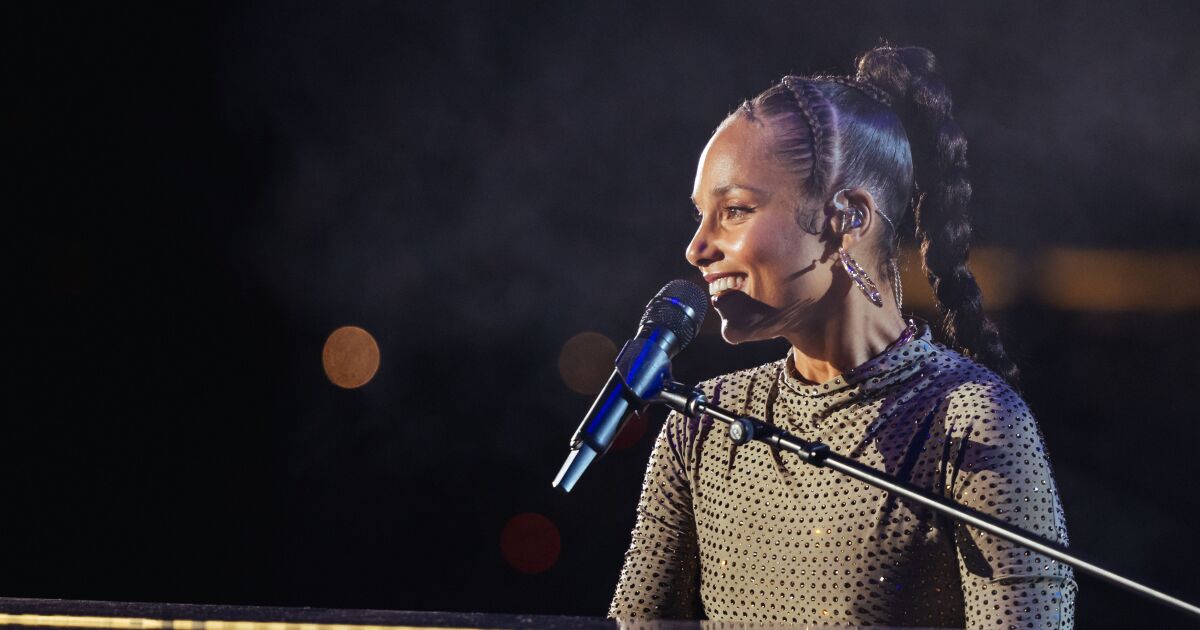 It’s not uncommon for music stars performing benefit concerts to give a shout or two to the cause they support.

She demonstrated her commitment to the beginning and end of her 13-song performance, for which Keys was accompanied by her five-piece band and 31-member San Diego Symphony Orchestra, ably led by guest conductor Sean O’Loughlin.

During her second number, “You Don’t Know My Name,” both upbeat and haunting, she changed the lyrics to the song’s spoken interlude. This interlude takes place during a mock phone call to a lover named “Michael” and Keys delivered it with a new twist tailored for the evening.

“Am I going to see you at the Curebound concert?” the 15-time Grammy winner asked the unseen “Michael” during her Friday performance of “You Don’t Know My Name,” a song from her second album, “The Diary of Alicia Keys.”

Ten songs later, before performing her encore of Keys’ 2004 hit “If I Ain’t Got You,” the piano singer and songwriter opened up about her connection to Curebound.

Her paternal grandmother died of the disease in 2006. The San Diego nonprofit, which celebrates its first anniversary this month, has already awarded $23 million in 90 grants to businesses making innovative research on curing cancer.

“So many of us have been touched by cancer,” said Keys, who is scheduled to perform tonight — minus the symphony members — at SDSU’s Viejas Arena.

“My grandmother passed away from cancer,” she continued. “So it’s really, really meaningful to me, this work that Curebound is doing. Because we don’t want to have to wear ‘F— cancer’ t-shirts anymore… We know what we have to do. ”

The gig was a triumph for Curebound, which raised $3.1 million on Friday and counts Fernanda Whitworth and Amy and Bill Koman among its founders.

It was a triumph for The Shell, which on October 24 hosted a surprise private concert by Billy Joel – who, like Keys, is originally from New York.

And it was a triumph for Keys, who lives (at least part of the year) in La Jolla with her husband, music producer Swizz Beatz, and their two sons.

After a slow start on a chilly night – the temperature plummeted to 55 degrees – Keys found his groove and got the crowd going with his sixth selection, a rousing rendition of his 2009 hit, “Empire State of Mind (Part II) ) Broken Down.”

Standing at the grand piano which she played intermittently throughout the night, she introduced “Empire” as a “song about hope; we were to sing it tonight. His spirited voice, punchy rhythm, and the big flourishes of the orchestra made a powerful combination.

Keys sang with infectious fervor throughout “Fallin’.” At five minutes, it was his longest selection. It was also the only one to show – albeit too briefly – his ability to combine dazzling classically inspired piano tracks with a jazz artist’s sense of harmonic adventure.

Friday’s hour-long concert was Keys’ first at the Shell. But it wasn’t his first time there. She and her husband attended the August 2021 “Illmatic” concert by New York rapper Nas and the San Diego Symphony.

His performance was also notable for what Keys did not do.

She did not leave the stage to change her stage outfit. She barely mentioned her new album. And, aside from a few fleeting electronic vocal softenings on a few choruses, she sang live — as evidenced by the few notes she didn’t quite hit and the audible breaths she took.

At a time when it’s not at all uncommon for established and rising vocal stars to mime much or all of their performances, hearing Alicia Keys sing, at times, less than perfectly brought a welcome human dimension to her concert- Curebound benefit. It was a welcome reminder of the value of hearing real emotions expressed in music in real time.