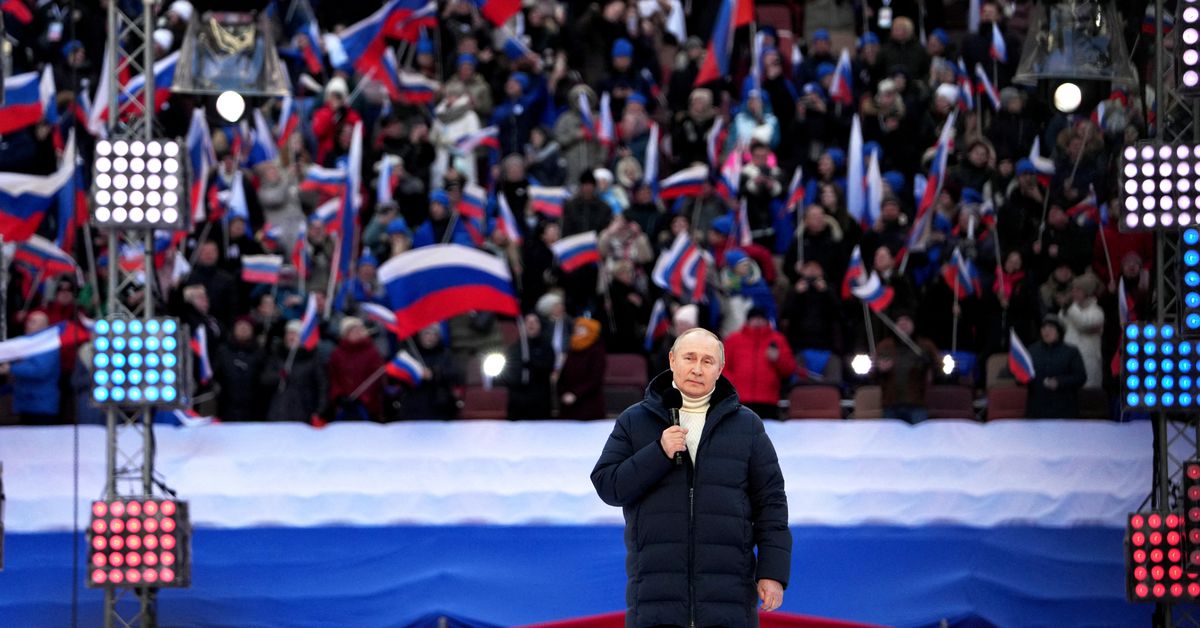 Putin promises Russia will win in Ukraine, but a glitch is hampering TV

LONDON, March 18 (Reuters) – Russian President Vladimir Putin on Friday justified invading Ukraine in front of a crowded football stadium, but coverage of his speech on state television was unexpectedly cut short by what the Kremlin called a technical problem with a server.

Speaking on a stage in the center of Moscow’s Luzhniki Stadium, Putin promised tens of thousands of people waving Russian flags and chanting “Russia, Russia, Russia” that all Kremlin goals would be achieved.

“We know what we have to do, how to do it and at what cost. And we will accomplish absolutely all our plans,” Putin, 69, told the rally from a stage adorned with slogans such as “For a world without Nazism.” and “For our president”.

Many Russian slogans used at the rally incorporated the “Z” symbol that Russian forces used as a design in Ukraine. It read “Za Putina” – “for Putin”.

Dressed in a turtleneck and coat, Putin said soldiers fighting in what Russia calls its “special military operation” in Ukraine demonstrated Russia’s unity.

“Side by side, they help each other, support each other and when necessary protect each other from bullets with their bodies like brothers. Such unity we haven’t had for a long time,” Putin said.

According to the RIA news agency, Kremlin spokesman Dmitry Peskov said a technical fault on a server was the reason state television suddenly cut itself off from Putin.

It wasn’t immediately clear why the server issue led to such an abrupt and unusual outage.

Putin says the operation in Ukraine was necessary because the United States was using the country to threaten Russia and Russia had to defend itself against Ukraine’s “genocide” of Russian speakers.

Ukraine says it is fighting for its existence and Putin’s genocide claims are nonsense. The West says claims it wants to tear Russia apart are fiction.

Before Putin spoke, Russia’s stirring national anthem, with the words “Russia is our sacred state”, rang out from the stands of the stadium used in the 2018 FIFA World Cup, along with pop hits more modern ones such as “Made in the USSR”.

Pan-Slavic poetry by Fyodor Tyutchev, whose verses warned Russians that they would always be considered slaves of the Enlightenment by Europeans, was read.

Russia has lost all illusions about its dependence on the West and Moscow will never accept a world order dominated by the United States which acts like a sheriff looking to make the most of a bar, a said Foreign Minister Sergei Lavrov. Read more

“He once said that these storms would bring glory to Russia,” Putin said. “It was like that then, it is like that now and it will always be like that.”