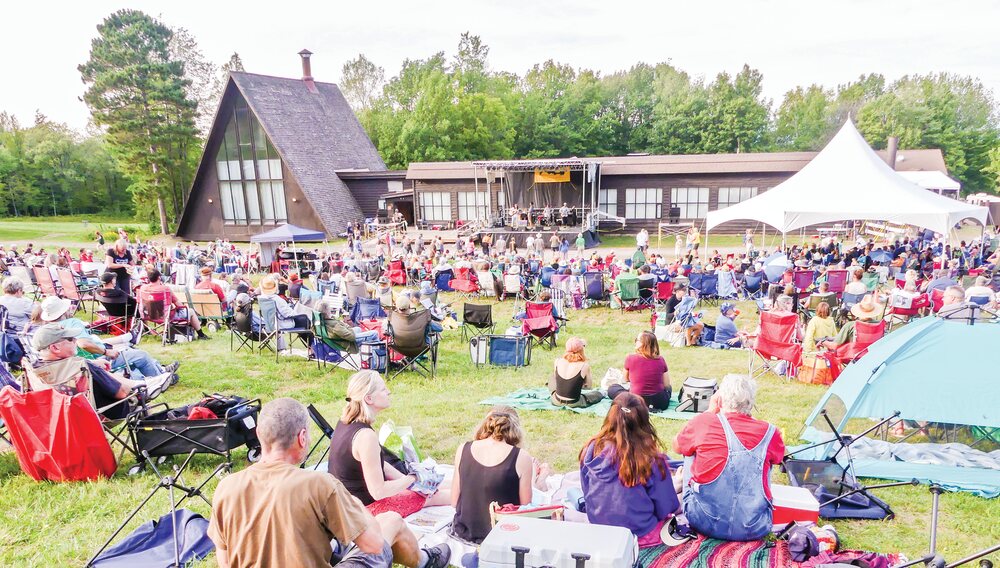 For a regular program of main stage performers, a platform was built directly behind the ski lodge in the Porcupine Mountains Wilderness State Park, adjacent to Lake Superior in Silver City.

The crowd came laden with a variety of hats and paraphernalia, including tents, chairs, refreshments and jackets – some of which were dragged in carts and carts from the parking lot.

Armchair Boogie, a bluegrass band that also promised a dose of folk and “funk”, erupted with endless energy on Saturday afternoon.

“It’s an honor to be in such a beautiful place with my people,” said Ben Majeska, who radiated cool on guitar and vocals. “I would like to come back here every weekend.”

The group, originally from Stevens Point, Wisconsin, is now touring the country and has had no trouble exciting audiences here.

People who weren’t actually dancing in front of the stage were at least shaking their heads, clapping, or swaying to the infectious sound that even made cafeteria staff step into a jig at times.

While hanging out inside the cabin, two brothers from the Minocqua, Wisconsin area debated which musicians they liked best during the 2-day festival. Jacob Hazelett said Armchair Boogie was his favourite, while Brian Hazelett said he “really loved” Luke Winslow-King, who previously offered a mix of Mississippi blues with a fusion of folk, jazz and rock.

Meanwhile, Rick Knoke from Iowa City, Iowa, was resting outside on a metal bench, from where he had a great view of the main stage nearby.

“I love this place,” said Knoke, who has traveled 450 miles each time to attend the latest festivals.

He said he also enjoys other music festivals, but claimed there was “something special” about the Porkies event. He likes the laid-back, dispersed crowd and added of the area in general, “The people here are fabulous. I’ve met so many people.”

Knoke said the Slambovian Circus of Dreams of New York was his favorite act at this year’s festival.

This band was the Saturday night headliner and the closing act of the festival.

Its members, as well as the audience, were challenged by a short bout of rain as the show was about to begin, but most people accepted it without hesitation.

Joziah Longo, on vocals, guitar and harmonica, said the weather forecast he had checked said there would be no rain until 10 p.m. “So it can’t rain,” he joked to the crowd.

Longo, who wore a top hat and a long vest, said the group’s concert there was his last assignment on the current schedule.

“We’ve just had a long tour, but we were looking forward to this festival the most,” Longo said.

Evalynn Goldberg, 18, of Duluth, Minnesota, was a top fan just before the band, where she waved her long skirt to the start beat.

“I’ve been coming here since I was a year old,” said Goldberg, whose parents are longtime fans of the festival, which started in 2005.

Regarding her favorite act this year, Goldberg said, “I really like JigJam.” This band was the Friday night headliner from Ireland, with a mix of Americana and bluegrass.

The performers on the chalet’s smaller indoor stage also had a grateful audience. Among the performers was Swedish singer Sophia Talvic, dressed in classic festival attire with a cute hippie print dress and floppy hat.

“She was awesome, man,” one guy told his partner as they left the room.

On the east side of the ski slope, the Street Barn was another option for music lovers wanting to enjoy an intimate, rustic setting with musicians performing without amplification or other electronic art.

My unknown brother was among the Saturday singers there, strumming his guitar while humming.

This year’s festival was the first offered since 2019, with organizers canceling the event for the past two years during the COVID-19 pandemic.

In the meantime, they’ve cut the event – which they bill as “an open-minded music lover’s dream” – from three days to two days, with a total of more than three dozen performances lining up. are held from 12:30 p.m. to 10:00 p.m. each day. , starting Friday, as well as children’s activities from 1 p.m. to 4 p.m.

Saturday emcee Todd VanDyke of Houghton acknowledged the work of the volunteers, who included ticket takers, traffic and gate controllers, stagehands and a fleet of men in black t-shirts who served as a friendly but vigilant security team.

Regarding festival director Cheryl Sundberg, VanDyke said, “Cheryl is doing a wonderful job with this, and we appreciate it.”

He also noted sponsors including Friends of the Porkies and the Michigan Arts and Culture Council.

Silver City is about 18 miles west of the village of Ontonagon.

Who will struggling households turn to after Britain’s crackdown on payday lenders? | Payday loans