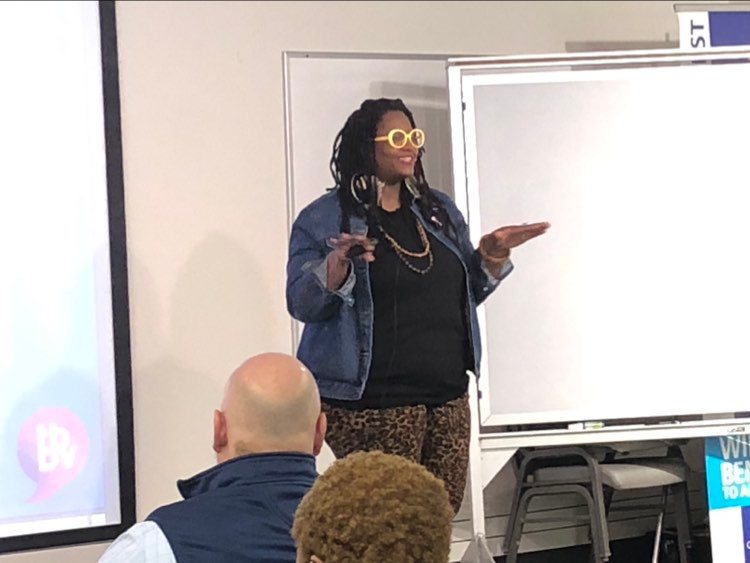 Fittingly, Midlander Erin Patrice presented the continuation of King’s legacy and how to create spaces at the community table.

Patrice, who has lived in Midland for 17 years, is involved in several community boards. She is also the creator of The Breaking Bread Village, a space where people come together respectfully, have conversations and share their views.

Patrice asked the others to describe what their table looks like. Responses included factors such as settling disagreements, having similar ambitions in different fields, creating safe and open spaces for conversation, and respectful tribe-like atmospheres.

Patrice explained that these tables could be formed anywhere, from churches and communities to boardrooms and with families.

Patrice challenged the audience to include others who have different values ​​or ideas. She explained the importance of intentionally accommodating diverse opinions when creating a painting, adding that understanding comes from listening to different viewpoints. She gave the Breaking Bread Village as an example, stating that she intentionally brings together people who are on opposite sides of the political spectrum, different faiths, and those who have supported Black Lives Matter as well as Blue Lives Matter.

Other factors in building a table are building a space where people feel safe being themselves and being transparent; accept people as they are; not judging or making assumptions before starting a conversation; and practicing active listening, paying attention to what someone is saying rather than just focusing on how to respond.

“What we want, we have to give to others if we want to grow and learn. I believe that when we get to know others authentically, it really makes us grow. When you learn about other people’s experiences, their backgrounds, what they’ve been through, you understand why they are the way they are. Even if in the end you still don’t agree with them, you understand a little more,” said Patrice.

Patrice shared that empathy and compassion is the most important step in creating spaces. She explained that having these two qualities present in conversations gives people space to share about themselves and allows them to open up more; creating open spaces allows for better understanding.

Patrice recalls a conversation she had with a white man who was “openly racist”. With an open and transparent environment to talk to, Patrice learned that the man was often bullied in his youth by black people. Patrice thanked him and expressed his sadness to have lived this experience. She explained in her presentation that she believed it was good for the man to interact with a black person who treated him kindly.

“In the end, I was able to have empathy and compassion for him, although I don’t agree with anyone generalizing the whole community. I understood why he felt what he felt,” Patrice said.

Patrice shared the beauty of what happens after people leave the table. She saw people meeting up later to continue the conversations. Patrice acknowledged that creating spaces for people isn’t always easy or safe, but it’s necessary to make King’s dream come true.

“It’s about creating spaces for everyone. Unless we are willing to do so, we cannot quote Dr King,” Patrice said. “Sometimes we have to create the space ourselves. People always say, “I want a seat at the table. If they don’t offer it, create a table.

Payday loan victims only have days to get the last payment