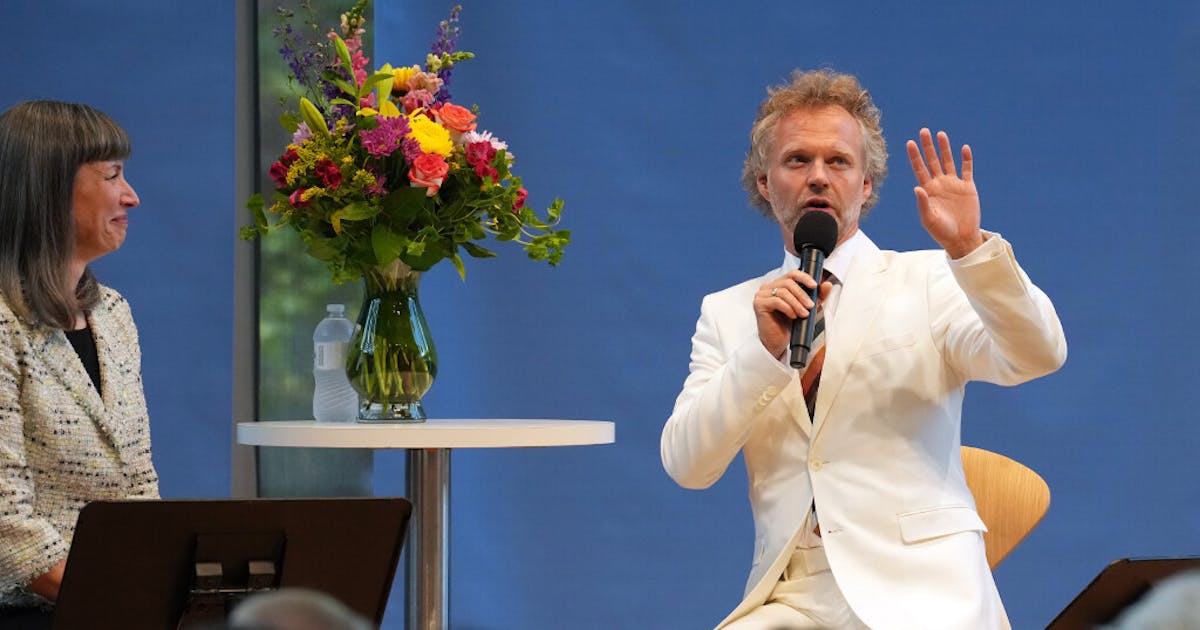 A small crowd of donors, musicians and Minnesota Orchestra employees gathered in the lobby of Orchestra Hall on Friday, munching on pastries.

“Big day!” someone whispered. “How exciting! »

Then Danish conductor Thomas Søndergård – who was announced as the orchestra’s next musical director on Thursday – arrived dressed in a white suit, his husband Andreas Landin at his side. After several rounds of speeches and applause, he recounted how, at age 6, he first heard a marching band and felt its pull: “I just had to be a part of it.”

Upon meeting the Minnesota Orchestra for the first time, “I had the same feeling of being drawn to the music,” Søndergård told the crowd, “and I actually reunited with 6 years.”

This week, Søndergård, 52, introduced himself — as leader, listener and newlywed — to Minnesota crowds large and small, including orchestra musicians after Thursday’s noon concert.

Those crowds, in turn, reacted to the news that this mid-career maestro, now music director of the Royal Scottish National Orchestra, would succeed their beloved Osmo Vänskä, who stepped down in June after 19 years.

The musicians are thrilled, lead bass Kristen Bruya said on Friday, noting that Søndergård “knows when to take charge, but also when to listen, follow and allow.”

“The chemistry between the conductor and a hundred musicians on stage can be a somewhat inexplicable phenomenon,” she said. “Sometimes it doesn’t work. But other times it’s the most natural thing in the world.”

Classical music critics and fans here and nationally anticipated the choice of the Minnesota Orchestra – in part because it was one of the few overtures that some hoped would change the composition of the conductors conductor at the head of the main orchestras of the country, a stubbornly white male cadre.

Thomas Otto, a classical music blogger, would have liked the orchestra to select a woman.

“I’ve tweeted at the Minnesota Orchestra several times, ‘Come on, this is your chance to be a part of something,'” he said. “So seeing the announcement was a little disappointing.

Otto, who grew up in Minnesota, now flies here from Washington, D.C., several times a year for what he considers a “double bill” – the Minnesota Orchestra one night, the St. Paul Chamber Orchestra the next. . He began tracking, via a spreadsheet, the orchestras’ lineup, analyzing it for race, gender and nationality. (“I miss all the war horses,” he said.)

He will therefore reserve judgment on Søndergård, he said, until he sees what kind of repertoire the orchestra plays under his direction.

At Friday’s event, Søndergård described himself as “a very intuitive musician. … I’m not one to have a complete picture in my head of how a score should sound”.

It’s clear that “he’ll be open to working with whatever we throw at him before passing on his particular vision of a piece of music to us,” said Jason Arkis, who plays timpani, who was also Søndergård’s instrument. before he turns to the direction. “It will be great, rather than having a dictatorial approach.”

Søndergård’s style is important to the musicians of the orchestra who, since a crippling union dispute and lockout a decade ago, have emphasized more open community processes.

Søndergård even talks about making himself useless.

In Scotland, he asks musicians to rehearse and perform without a conductor for one week a year, removing the baton so that musicians stop trusting their eyes and open their ears. “What can they do without me? he said.

Thus, before choosing a repertoire or defining an artistic vision, Søndergård wishes to engage the staff and the musicians in a long dialogue.

In an interview on Friday, he mentioned several composers he would like to program, including composer Richard Strauss. He said that Strauss, “over the years, has become more and more important to me, from the smallest pieces to his greatest works”.

It was Søndergård’s way with Strauss that first won the appreciation of the musicians of the Minnesota Orchestra.

For his debut with the orchestra in December, he conducted them in Strauss’ symphonic poem “Ein Heldenleben” – “a difficult piece for the conductor to perform”, said bassist Bob Anderson. But this time it was different.

“It’s really hard to put into words,” Anderson said. “But you know, it was just fine.”

Anderson had hoped the search committee would choose Søndergård or German conductor David Afkham, who also returned to Orchestra Hall this spring.

“If it was someone I didn’t like, I would just retire,” said a laughing Anderson, who after 48 years with the orchestra is its longest-serving member.

But he plans to stay, he said, to see what Søndergård and the musicians come up with together.

Australian singer reunites with B.C. girl who wrote fan mail after her pup chewed on a letter