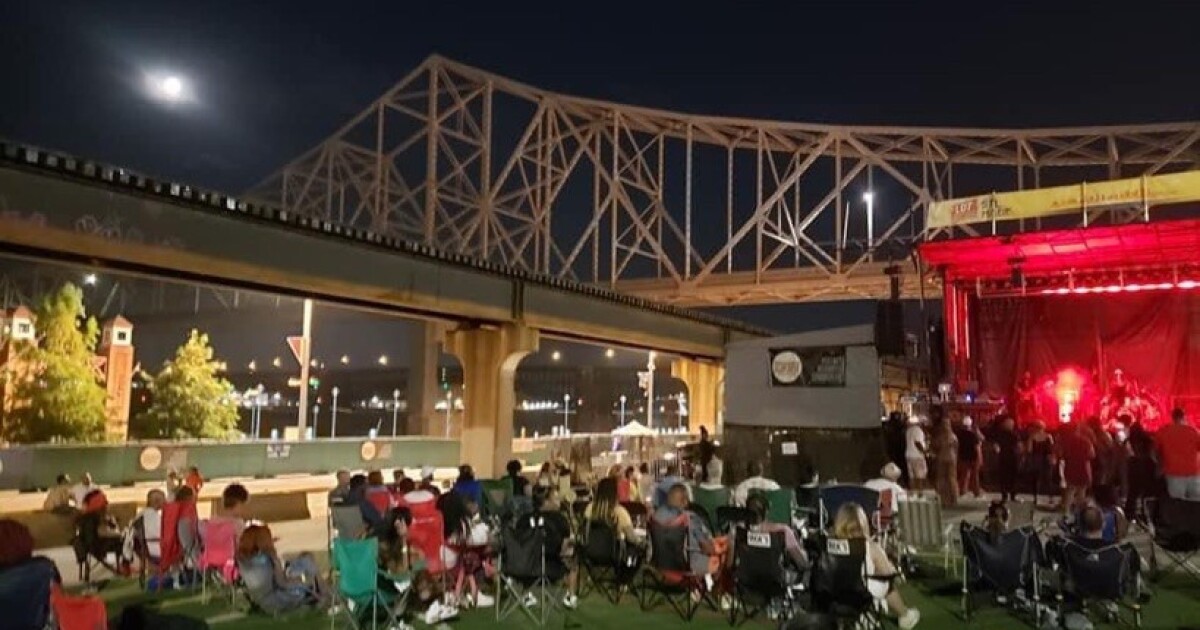 Last year, Drew Jameson toured St. Louis with his morning coffee to demarcate areas underutilized by the city. The former talent buyer and club promoter had one mission in mind: to find parking lots he could turn into outdoor concert halls.

This month he relaunched his concert series at a location with one of the most awe-inspiring views to date – Laclede’s Landing on the banks of the St. Louis River.

â€œWhen you are downstairs you are looking at the scene: there is a piece of the Ark behind you, there are the two bridges sitting behind you, Eads and the MLK bridge; and there is a beautiful river, by the river to your left. And at night, the moon just shone on everyone, â€said the owner of Jamo Presents. Saint Louis on the air.

â€œIf you can enjoy the view of the city, that’s as good as it gets.â€

During his quest to organize riverside concerts, Jameson also gained a better knowledge and understanding of the neighborhood, which included the homeless community living in informal settlements in the area.

Earlier this month, people living near the riverside feared they would be evicted from their encampments to accommodate the concert space. Jameson said it was never his intention.

â€œI’ve gotten to know the waterfront community well over the past few weeks – we get along really well,â€ said Jameson. “There was never an effort to deport anyone, so to speak, but there was a misunderstanding.”

Part of this misunderstanding was noted in a recent press release from Mission STL tent, a local advocacy group created last year to help provide emergency tent shelter and supplies to homeless people in the city.

Tent mission declaration noted that Jameson had not contacted defenders earlier due to instructions from Mayor Tishaura Jones’ office.

â€œI think it boils down to this: I can’t meet any real demand with the city’s resources,â€ Jameson said. â€œI’m a very small business – I don’t have a lot of influence, so to speak, in that big political-type way with the mayor’s office. So I understood that there were negotiations and that I would have been hindering, and that’s what I was asked to do was not to interfere.

Since then, Jameson has donated $ 500 to serve the riverside homeless community. And at every concert this fall, Jamo Presents includes a community-run booth to educate spectators about homelessness issues and collect direct support donations for the community.

Fridays Saint Louis on the airJameson also spoke with host Sarah Fenske about how this concert series, which includes several free shows, is part of a larger effort to revive downtown St. Louis.

â€œDowntown St. Louis has a little bit of stigma right now keep going with crime and all that, â€he said. â€œAnd some of them, of course, have facts to back them up. And I think the challenge [is] walking into that neighborhood and making it a safe experience, which we felt a lot here last week and at the start of week two.

He added that the main way to achieve this is to ensure well organized and secure events.

â€œSecurity is created by events,â€ said Jameson. “It really stops the criminal activity a little bit that could have been there if nothing was happening.”

â€œI have seen some incredibly good behavior changes in this neighborhood,â€ he continued. â€œIt’s impressive that we haven’t had any incidents so far, and that people have felt very safe and have been able to explore the riverside safely. It’s a very good feeling.

“Saint Louis on the airâ€Brings you the stories of Saint-Louis and the people who live, work and create in our region. The show is hosted by Sarah fenske and produced by Alex heuer, Emily woodbury, Evie hemphill and Lara hamdan. Jane Mather-Glass is our production assistant. The sound engineer is Aaron Doerr.