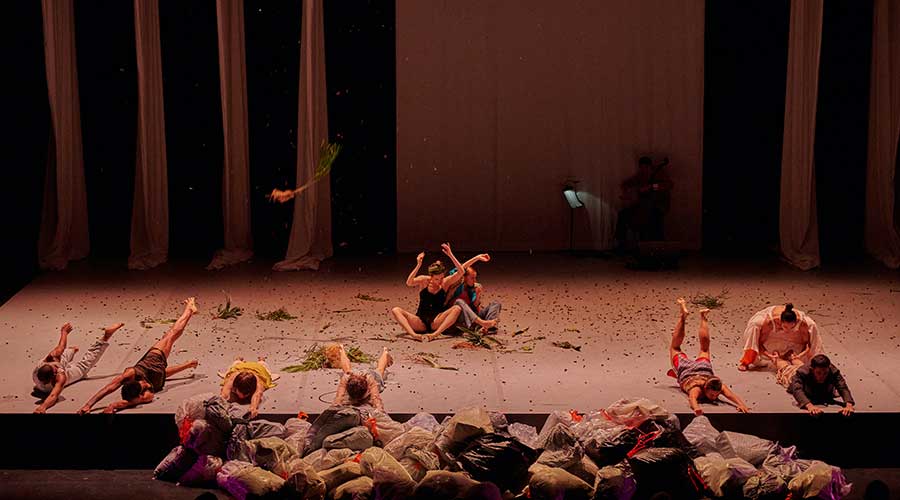 Built, designed and rehearsed at the Wallis Annenberg Center which just reopened during COVID, Joy shines with the splendor of a perfectly healthy achievement. Vision and realization coincide. No friction is felt anywhere.

Perfect fit, magical adhesion, for example, between choreography and music. As the curtain rises, cellist / composer Isaiah Gage begins to sort his cello as if it were a flamenco guitar, in a most surprising, lyrical and yet lively pizzicato. Soon, his lines are reproduced in loops that he exploits from the stage by means of a pedal. He now has his hands free to weave dense, thick and eloquent legato lines (beautiful melody threads or pure, powerful tones) into the staccato setting. The music never stops. Or he does it, abruptly placed in the middle of a line, striking the silence with a sparkling effect to mark a passage or the end of a chapter. It picks up just as quickly. Besides these sharp punctuations, he never stops. It never stops either, constantly evolving from blunt statements to thin, soothing whispers, to a haunting crescendo to daring climaxes, quickly mellowing, finding the next path to explore. Congratulations to an extremely talented instrumentalist / innovator.

Joy lasts seventy-five minutes which feels like five, for there isn’t a second when the energy or the imagination runs out. The play is divided into three segments of about twenty minutes each, separated by short gaps when the audience is not specially invited to leave their seats and the light in the house remains dim. Thus, the spectators remain connected, bathed in the atmosphere that the dancers and the music project, but they are not overwhelmed. The short pauses allow the three sections, each autonomous – though the trilogy is clearly more than the sum of its parts – to echo and sediment. Every debut finds the audience still warm, as well as refreshed.

A white screen displays a few key phrases, witty or fanciful, ironic, elusive. They appear every now and then, mostly at the beginning, to provide a route suggestion, vaguely point to directions – more of an additional color or texture than a set of captions. The last sentence projected says something like, “Dogs have cared for humans from the start, not to protect their property, but so that their integrity is not stolen.” If indeed a dog trots on stage, walking coolly among the dancers, apparently when he wishes, the quote functions as a summary of the whole performance.

Dialogue with companions, with space, with music, with the public

Each dancer tells his own life, sotto voce and impetuous, intimate and daring, ten bravours which captivate us as much by their art as by their total idiosyncrasy. We have the feeling, as each dancer takes center stage, then extends that center to an arabesque of triumphant peripheries, dialoguing with companions, with space, with music, with the audience, while offering the monologue the most personal and the most powerful, that no one in the world can possibly dance in their own way. Ten of them, impeccably tuned, perfectly tuned. Corn they are unique irreducible. As, we are reminded, we all are.

Defining this piece as “entertainment” would obviously be decreasing. The compound of hearing, visual and kinetics engages our mind, emotions and senses so completely that we are transported elsewhere. Survey. The effect is not fun, although there are some hilarious moments, and laughter every now and then just explodes around the house. But the feeling that Joy stirring is the euphoria perceived by the body as a whole, suddenly, from the simple awareness of being fully alive. This pure and primordial blessing.

Colorado Boulevard is your place for educational events, informative news, and socializing for the greater Pasadena area.
We strive to inform, educate and work together to create a better world for all of us, locally and globally.