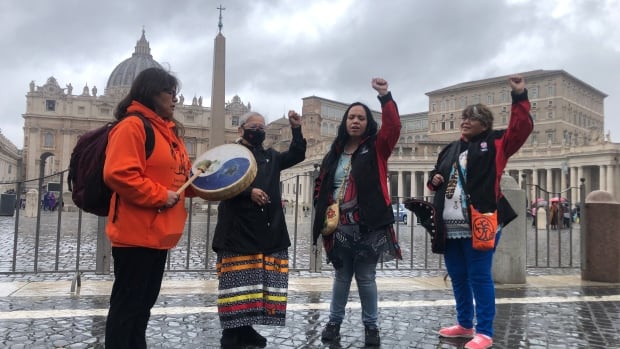 First Nations, Inuit and Métis delegates are meeting Pope Francis at the Vatican on Friday for a final audience after a week of discussions on the Roman Catholic Church’s primary role in Canada’s residential school system.

All Indigenous delegates attend the public gathering. The pope held separate private meetings throughout the week with First Nations, Inuit and Métis delegations.

Among other things, delegates called on Pope Francis to finally apologize for the Church’s role in residential schools, to intervene in the case of a fugitive Oblate priest wanted in Canada for a sex crime, and to rescind two papal decrees used to justify colonialism. in the Americas.

Chief Wilton Littlechild, former commissioner of the Truth and Reconciliation Commission (TRC), said it was “a long walk to Rome” for delegates who explained the continuing impacts of the residential school experience to the chief. of 1.3 billion Catholics.

“We didn’t just come to complain. We came up with solutions,” said Littlechild, who attended three different boarding schools for 14 years.

“It’s not just a one-way street. We’re talking about walking together.”

Littlechild said Friday’s meeting, which also falls on her 78th birthday, will be “the first day of reconciliation.”

The Roman Catholic Church is the only institution that administers the residential schools and has yet to formally apologize to the survivors.

The TRC – which from 2008 to 2015 reviewed the record of Canada’s residential school system – has called for a papal apology as part of its 94 calls to action. The commission also urged all religious and faith-based groups to reject concepts used to justify European sovereignty over indigenous lands and peoples.

“I hope that [the Pope] will be more direct about his visit to Canada and his apology. Not that he has to apologize here,” said Phil Fontaine, a residential school survivor and former national chief of the Assembly of First Nations.

“Our preference is for the Holy Father to come to Canada, apologize on Canadian soil and do so in one of our territories. That is our hope and our wish.”

Colleen Jacob, the former chief of the Xaxli’p First Nation in British Columbia, recounted her experience at residential school in a letter to the Pope delivered during her private meeting this week with delegates from the Assembly of First Nations.

Jacob said she still vividly remembers the bus that first picked her up in 1974, when she was just 7 years old.

She said she was deposed and separated from her older brother.

“It was a big shock for me because at home I followed him everywhere,” Jacob said. “I would cry when he didn’t take me.”

Jacob said the Pope must understand the harm caused by the separation of children from their families and communities.

“There have been so many things our people have been through that I feel like we should never have gone through,” she said.

“A lot of the hardships that we went through, it really wasn’t ours to go through to begin with.”