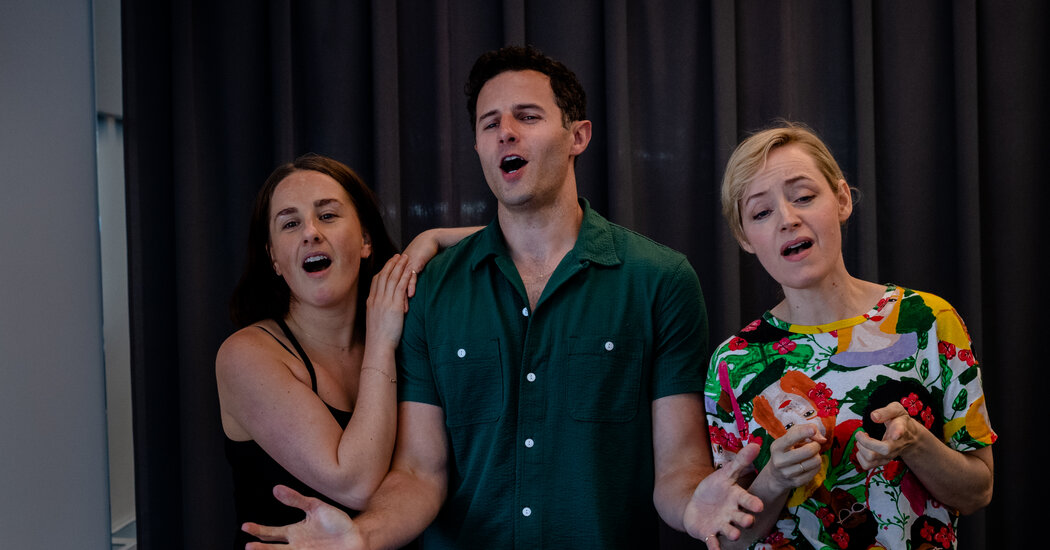 Broadway’s comeback season has been a hurricane. Even the heavily-awarded revival of a Sondheim favorite like “Company” couldn’t withstand the shaky ticket sales prompted by a pandemic-wary theater community.

There was still a lot to rent and a lot of things will remain etched in the memory. But more than most of the other musicals that opened last season, the one whose songs and sheer boldness have the best chance of living in my heart — and on my shower playlists — is the one that briefly shone. , amid a deluge of vitriol.

The one who only played 59 performances and whose Netflix presentation won five Razzie Awards: the unfortunate “Diana, the musical”.

Although they won’t sing from its score, Hartrampf said the musical will be cheekily referenced throughout.

During rehearsals for the club number — ironically enough, in a Midtown studio across from the Longacre Theater where they once ruled — the three reminisced with a mixture of good humor and professional acceptance. A promotional text for the concert, after all, nods knowingly to Hartrampf’s Razzie nomination and brief Broadway run.

He also references the Netflix fiasco that followed the musical’s premiere on the streaming service months before it opened on Broadway. Recorded without an audience amid the pandemic shutdown, it landed with a thud and that response helped determine its eventual fate.

“Part of the struggle was that audiences didn’t know what to expect from a Diana musical,” Hartrampf said after the rehearsal. “They were kind of expecting us to say, ‘You can laugh because it’s comedy or be quiet because it’s drama. We had to show them what this room was going to be.

By the time I attended the musical’s premature final performance just a month later, the cast had leaned all the way into the absurdity. The hyperkinetic ensemble (among the fullest dances of the season) was cheekier than ever, but the main cast also seemed to be having a good time. De Waal’s cheeky wink had become more flamboyant, and the cast reveled in the extravagance of his swear-laden song about the dress Diana wore to show off her romantic rival.

Although the Razzies losers named her Worst Actress, de Waal’s extraordinary performance of vocal gymnastics earned her a Drama Desk nomination. I would also have given him a nomination for Tony, with a special citation for Grace Under Internet Fire. She had already apologized for the Netflix special when the show opened and stayed away from social media throughout its run.

De Waal’s performance sold me on the idea that Diana Spencer was a 19-year-old stripped of a comfortable young adult, cynically picked up by stuffy royals for good optics, then discarded once her personality wore off. gets in the way. (That problem hasn’t gone away.) His Diana was temperamental, mean-spirited, and rude, but ultimately a winner.

The music, by Bon Jovi keyboardist David Bryan, was as arena-ready as you’d expect, reminiscent of Andrew Lloyd Webber’s early marriage between rock bombshell and theatrical silliness (Play A: “Evita”). ) The lyrics (by Bryan and Joe DiPietro) were little deeper than a “Live Laugh Love” poster but, sung full force, they stuck like Super Glue. Diana’s “I could use a prince to save me from my prince,” rather silly on paper, came across as a primal cry.

And director Christopher Ashley, who won a Tony for his work on “Come From Away,” made “Diana” move as seamlessly and hypnotically as the princess’s frenetic, tabloid-ready life. (Nathan Lucrezio, who played his biographer Andrew Morton on Broadway, will also appear in Hartrampf’s act.)

Among the criticisms leveled at “Diana” was that it exploited the tragic story of a real woman for pop consumption. To this point: Every biographical narrative can be seen as inherently reductive and exploitative. If director Pablo Larraín and actress Kristen Stewart can (rightly) score love awards for their cinematic portrayal of Diana as the “last girl” in a horror movie (2021’s Spencer), I don’t see no reason why this musical should be punished for molding the source material to fit the dazzling structure of the form.

Was “Diana” tasteful or poetic? Definitely not. But it was fun. Remember fun? So many productions this season have failed to do so, aiming instead for political points, varying successes and even weaker sense of the game.

You have to take a job on her own terms, and ‘Diana’ put them on 10 minutes, when the future princess took over cello duties from Mstislav Rostropovich and splashed around in a royal crowd like Prince Charles did the robot. This fantastic sequence — illustrating how Diana would rather be on a nightclub date than a dreary classical concert — reflected the show’s unabashed commitment to pop maximalism.

If biographical obligations sometimes strangle the book, even its narrative flaws are saved by wacky staging choices. (If you somehow forgot the dizzying tone during intermission, Act 2 opened with Diana’s secret lover, riding instructor James Hewitt, shirtless in a saddle, screaming a fierce high E.)

I count the lavish spectacle among the works which, pardon my youth, “kill”: highlighting the unlikely accomplishments of an outsider (usually a woman) with the subtlety of a six-foot sword, and twice the brilliance.

That’s what makes Dolly Levi’s arrival at Harmonia Gardens so glamorous; Evita’s “Rainbow High” clothes are so decadent; Momma Rose’s ambition is so delicious. The spectacle of someone transcending their given situation is woven into the fabric of musical theatre; Diana quickly changing from multiple outfits into one number, as she announced her plan to regain her visibility, had it in spades.

Still, Davie admitted, “it put a lot of people off. Even though there was this group of people who loved it, there were others who were like, ‘How dare you?’ »

As with many critically reviled Broadway musicals, those who loved it banded together, dubbing themselves “Difanas.” They clung to dresses, to belts, to the insane boldness of an AIDS patient singing to the princess, “I may be sick, but I’m handsome as hell.”

such a fan, Lizzie Milanovitch (who uses the pronouns them/them) designed a custom “Diana” sweater, then tweeted an offer, expecting a few inquiries. They ended up placing 180 orders, they told me, including one for Hartrampf.

“We have Twitter to thank so much for creating the audience we had,” Hartrampf said. “The week the movie came out, Twitter was tough. But then the backlash backlash was so wonderful, with people standing up for our show and taking ownership of the material, and understanding what the show was supposed to be about.

Participants in his final performance were girls and gays – theater enthusiasts, writers and performers who have walked enough rabbit holes on YouTube to recognize a diamond, no matter how rough, when they see one.

Mark my words: the show is set for another look. Consider “Legally Blonde,” which is currently enjoying critical reassessment thanks to a London revival led by Lucy Moss, and continues social media affection for its original production, bubblegum pink.

Or consider the recent interest in revising the narratives around stars like Britney Spears, devalued and rejected women until a new generation comes to “rediscover” their value. (Moss’ own “Six,” about an earlier set of royals, the wives of Henry VIII, takes a step ahead by directly addressing this schism.)

I can’t wait for a group of downtown drag queens to mount a low-budget, high-profile production of “Diana” in 10 years. They will know exactly how to play it. Maybe that’s why a local queen bring de Waal on stage singing “Underestimated,” the musical’s opening solo, at a concert night at a Fire Island Pines club — Tony Awards night, no less — seemed so spectacularly fitting.

Her soaring voice in the fabulous finale is streaming through my headphones. While Sondheim’s work is the reason I sleep well at night, it’s sonic moments like these that wake me up in the morning.

Jamaica win netball silver and a legion of new fans