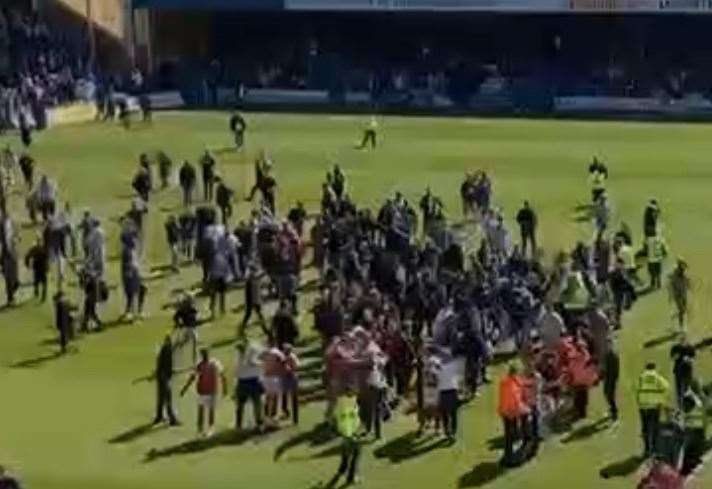 A number of football hooligans who invaded a pitch after a season-ending game have been charged with a number of offences.

As the full-time whistle sounded, supporters of Gillingham Football Club and Rotherham United charged onto the grass at Priestfield Stadium in Gillingham.

A fight broke out between factions of supporters with objects thrown as the home side suffered a 2-0 defeat.

Gillingham FC needed a win to stay in the third tier of English football as away side Rotherham battled for second place.

In the end, the Yorkshire side ran away with the result securing automatic promotion to the Championship while the Gills were relegated.

The resulting pitch invasion has been under police investigation ever since, and now 29 fans have been slapped with postage charges for public order offences.

This includes 15 home supporters and 14 away supporters – one of whom was also charged with common assault after allegedly pushing a steward.

All defendants are due to appear in Medway Magistrates Court on December 8 or 9.

Superintendent Warren Franklin said: “Kent Police take incidents of public disorder and violence at sporting events very seriously as they can expose other innocent bystanders including children, the elderly and people disabilities, at significant risk.

“We have a good relationship with all Kent football clubs and remain committed to helping keep their grounds as safe as possible for all to enjoy.”
Gillingham FC co-chairman and chief executive Paul Fisher said: “The football club is delighted to see that the police have dealt with the unsavory incident which took place after the final whistle against Rotherham United.

“Such behavior will not be tolerated at a family club like Gillingham.

“We would like to remind all supporters that entering the pitch is a criminal offense under the Football Offenses Act.”

Those billed from the home section include: