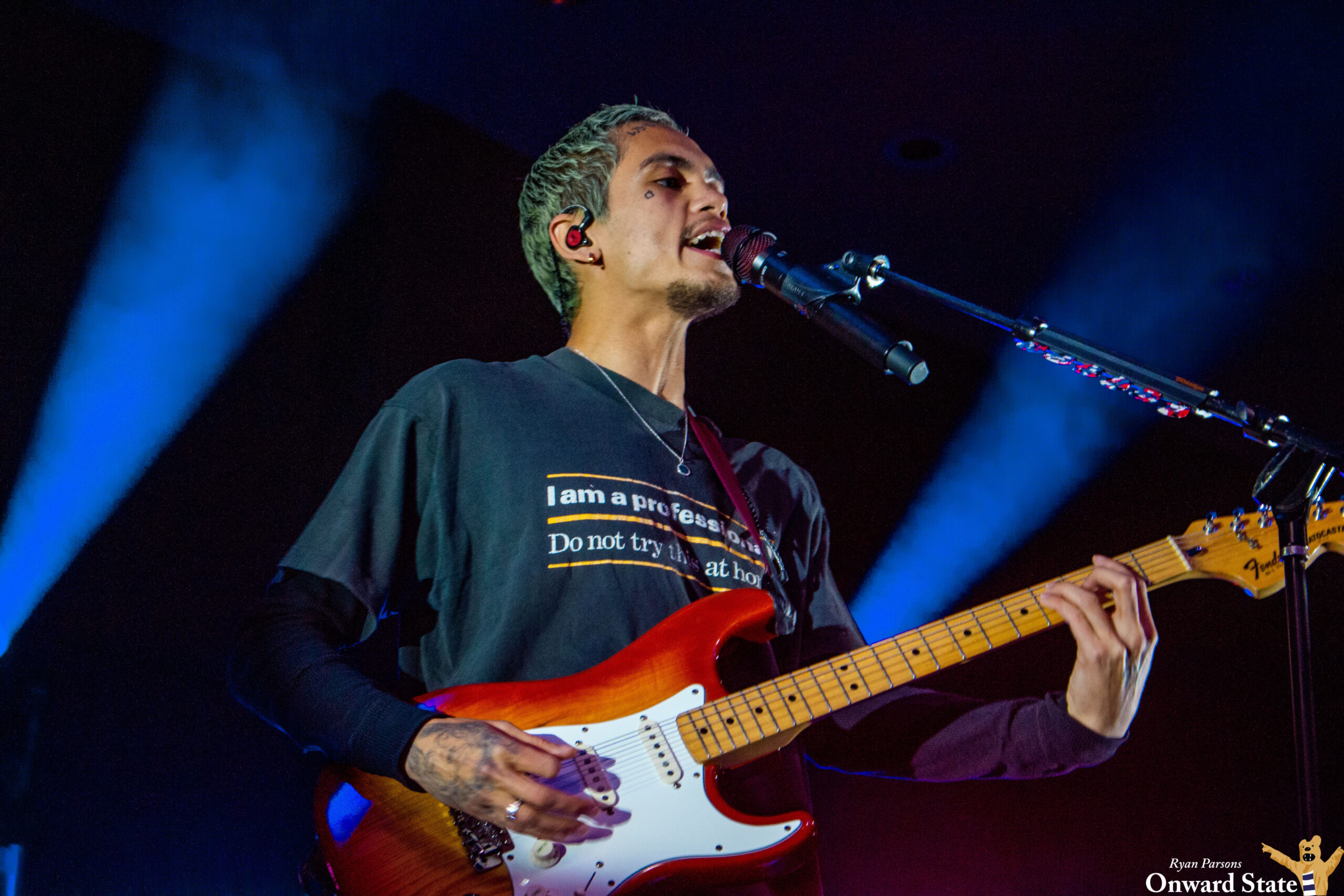 Singer-songwriter and “Euphoria” actor Dominic Fike performed at Alumni Hall on Friday night to an energetic sold-out crowd. For days, lines have wrapped around the HUB for free tickets to the event hosted by Penn State’s Student Programming Association (SPA).

Fike appeared on stage with “Come Here” and started the night off with the fan-favorite “Babydoll,” which had the crowd buzzing and cheering. He sported a blue-green hair color, “I’m a professional. Don’t try this at home,” a graphic tee and gray carpenter pants.

The musician told the crowd that his mother was from Pittsburgh, which caused the audience to erupt in cheers. He went to Sheetz and saw the $10 all-you-can-eat fries for a month, so now he knows “why [his] mom is like that [she] is.” Following Sheetz’s discussion, Fike gave a loud “We Are!” cheer.

The next song of the night was “Phone Numbers”, a ~vibey~ Fike classic. Fike then performed a unique, higher-pitched version of “Chicken Tenders”, which the audience applauded throughout the song.

The next two songs the crowd played on were “Double Negative” and “The Kiss Of Venus” by Paul McCartney. Fike gave the crowd a look back at the start of his career with a sweet performance of “She Wants My Money.”

Fike showed off his vocal abilities with “Acai Bowl”, which was a more fluid version of the popular track.

A woman shouted: “You are so sexy!” during a quieter moment between songs, which had the crowd erupting in cheers and laughter. “Politics and Violence”, “Wurli” and “Why” were the next three performances.

Later, Fike took a moment to ask how the crowd was doing while navigating COVID-19.

“We’ll see what happens. There’s a lot going on in the world. The world is already fucked up,” Fike said. “Let’s just have a good time tonight and deal with that later.”

Fike explained that he’s been working on lengthening his set since everyone knows all of his songs since they’ve been out for a while. He also announced to the public that a new album would soon be in the works.

Fike sang the dynamic “Westcoast Collective”, which showcased his soft yet raspy vocals and guitar expertise. The crowd chanted “Chug! Blow! Blow!” while drinking a sip of water. Fike laughed that’s how he knows he’s in a college town.

“Which dorm will we check into tonight?” Fike asked the crowd to make it rowdy again.

Fike performed “Vampire” ahead of the highly anticipated “3 Nights.” Audiences went wild for Fike’s most popular track and rebounded with the easy-listening beach track.

On Friday night, Fike provided Penn State with the ultimate live performance treatment with unique spins on his most popular songs and a glimpse of his dynamic, cutting edge guitar abilities. Fike gave audiences a listen for her sweet vocals and generated anticipation for her debut album.

Colleen is a junior biology student from York, Pennsylvania, and is one of Onward State’s associate editors. She abuses the ~tilde~ and aspires to be none other than the great Guy Fieri. You can find Colleen filling up her gas tank at Rutter’s, Pennsylvania’s ~superior~ gas station. Please direct any questions or concerns to [email protected]