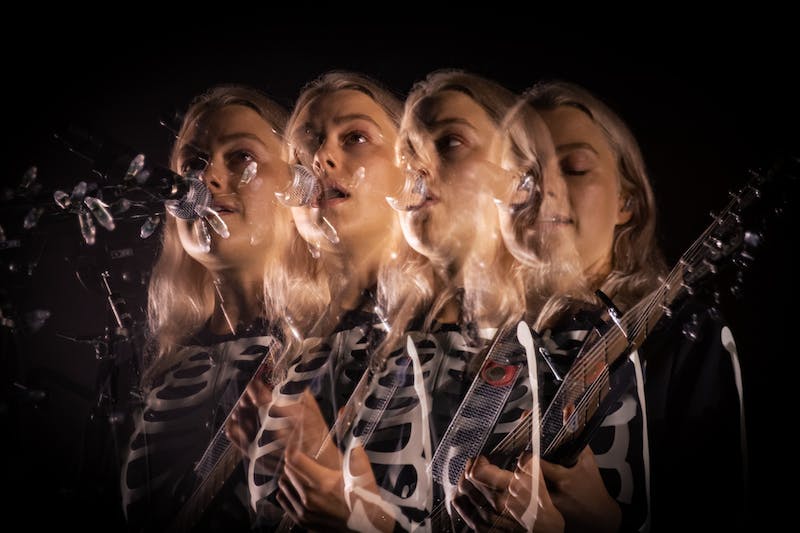 Column: Phoebe Bridgers “Could Do Anything She Wants To Do”

The lights turned black. Christmas lights wrapped tightly around microphones and instruments provided the only light in the entire amphitheater. Thousands of fans in Dr. Martens and fishnets screamed with impatience. A group of musicians dressed in skeletons entered the stage and a single guitar hit sounded.

As the lights came on, Phoebe Bridgers walked to the front of the stage and started singing “I hate you for what you did, and I miss you like a little child” – the opening lines of his best-known tune, “Motion sickness.”

I was frankly worried about the enjoyment of the concert since Bridgers’ music is often bass and lyrically oriented. The concerts that I have enjoyed the most in the past are those of energetic performers like BeyoncÃ© and Alanis Morissette.

However, Bridgers was able to create an incredible environment animated by impeccable vocal performances, an obvious passion for his music, and relaxed interactions with his fans.

Bridgers is unmistakably herself. While I don’t know her personally, her public presence hasn’t been marred by the expectations of fame or mental exhaustion that I’m sure accompanies a nationwide tour.

At one point, she stopped the whole show just to hear a joke that a fan on the barricade was telling. Hearing the joke – after asking the viewer to repeat it a few times so she could hear it – Bridgers simply laughed and said, “It was totally worth it.”

She didn’t share with the rest of the audience what the joke was, but this minute interaction with a fan illustrates her undeniable humility.

MUNA, a relatively new group on my radar, opened for Bridgers. The only song I knew before the gig was “Silk Chiffon”, which stars Bridgers. However, MUNA blew me away.

They were energetic and their songs were addicting. I’ve added almost all of the songs from their set to my monthly playlist. I highly recommend checking out “Stayaway” and “I Know a Place”.

Bridgers’ setlist was essentially her second studio album, “Punisher,” from start to finish. I love concerts like this; the music is so authentic and it’s a perfect concert setup for real fans.

However, there wasn’t enough time to play the entire album, Bridgers said. Fans were then asked to choose between â€œGeorgiaâ€ and â€œScott Streetâ€. I called out my vote for “Scott Street”. This song defined my first semester of college when I was sent home – along with most of the early years at UNC – as COVID-19 cases rose sharply on campus.

Bridgers went on to play “Scott Street”, and it’s a moment I’ll cherish forever. It was like watching my life come full circle – from the desperation of a virtual first semester to a point where I’m happy with where I am in life and happy with whatever life has in store for me.

Bridgers has the unique ability to balance the most depressing songs you’ve ever heard with subtly energetic live performances. She locked the audience in a trance and demanded ultimate captivation.

I was happy to oblige.

To receive the news and headlines of the day in your inbox every morning, subscribe to our email newsletters.

Philharmonic launches its audience into an orbit of another world