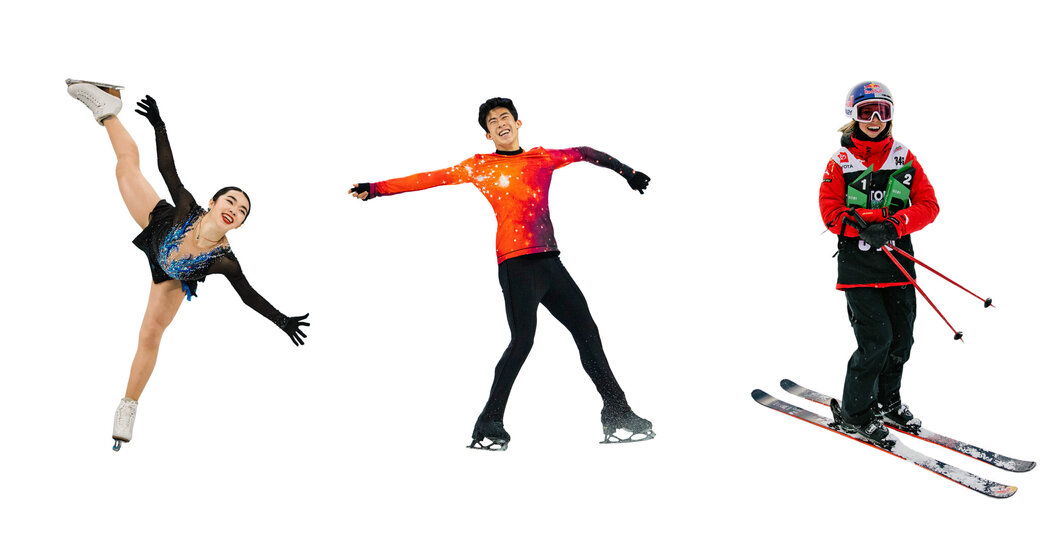 BEIJING — As sports fans around the world marvel at the aerial contortions of skier Eileen Gu, many in China are professing their admiration for a “Frog Princess.”

Americans who have watched Nathan Chen battle his way to a gold medal may be confused to see Chinese figure skating fans knowingly refer to someone named “Chen No. 3.”

And while Russian figure skating star Anna Shcherbakova’s name may be a mouthful for some of her Chinese-speaking fans, a moniker that translates to “Daughter from a Wealthy Family” rolls much easier from their tongue.

“Nicknames are easy to remember,” said Zhou Yuyao, 22, a figure skating fan from Hebei province. “Russian names are too long.”

Every culture and country invents nicknames, but few do so these days with the ingenuity and enthusiasm of Chinese sports fans on the Internet. This impulse turned the Beijing Olympics into a week-long lesson in cross-cultural puns.

The motivation behind this phenomenon, as noted by Zhou, is quite simple. Official phonetic transliterations of international names in Chinese — a language whose written characters convey distinct sounds but also distinct concepts and things — can be long, unwieldy, and produce unrelated, fundamentally nonsensical strings of characters.

But that same linguistic complexity makes the process of creating nicknames, for domestic and international public figures, fruitful and fun for Chinese fans.

The methodologies for making them vary, from simple to confusing referential: people focus on physical characteristics or personality traits; play with phonetic and visual word games; or play with references to public statements, current events, or a bit of obscure history.

This type of evocative nickname has deep cultural roots in China, according to Shaohua Guo, a professor of Chinese language at Carleton College. Children are given nicknames to compensate for the seriousness inherent in the meaning of their first names. Even for adults, the relatively small number of common surnames in China, as well as given names that are usually only one or two characters long, provide more incentive to differentiate pseudonyms.

“The Chinese are almost in competition as to who can be more creative with these,” Guo said.

Gu’s nickname “Frog Princess” (青蛙公主), which she uses on her Chinese social media accounts, comes from a green helmet she once wore in competition. Although this origin seems quite simple, Chinese fans online have also used other nicknames this month that might need more explanation for foreigners.

Take “Guai Ling” (拐凌): Here, fans have created a phonetic smoothing of the first two syllables of Gu’s Chinese name, Gu Ailing, to make a well-meaning joke that she speaks Chinese with a Chinese accent. Beijing. (The accent is often given soft ribs in China for its contractions and stuck syllables.)

“It’s a way for fans to express their affection for the athletes,” said Yao Jiahui, 23, a figure skating fan from Hunan province.

Yao, referring to Chen by his Chinese name, Chen Wei, noted that some fans call him “Tigger” (跳跳虎), using the Chinese translation of the Winnie the Pooh character.

“It comes from popular recognition of his superior physical fitness and excellent jumping ability,” Yao said of Chen (who was called meaner names online this month by detractors).

One of Chen’s other nicknames, “Chen No. 3” (陈三), requires some understanding of international figure skating history. In the eyes of Chinese skating fans, he is the third top skater in North America with the Chinese surname Chen, which in English can also be spelled Chin, Chan or Tan, depending on the dialect of origin. . Before him were Tiffany Chin, the 1985 US national champion, and Patrick Chan, Canada’s 2018 Olympic gold medalist.

Following this logic, the nickname “Chen No. 4 Little Sister” (陈四妹), was given to another current American skateboarder, Karen Chen.

“My mother told me about it because she sometimes likes to read Chinese forums,” Karen Chen said. “It’s cute that they give us skater nicknames. I like nicknames. My Instagram handle is @karebearsk8. It’s unprofessional – it’s literally from a nickname a friend would call me.

In America, obituaries for sports nicknames were written a long time ago.

Compare that to the high-profile pun that powers the names NBA stars receive from Chinese fans. For example, Nick Kapur, professor of East Asian history at Rutgers, pointed out that Klay Thompson was known to some Chinese fans as “Soup God” (汤神). Chinese fans often use “God” to refer to anyone who is highly skilled in a field. The Chinese character for soup is also the first character in the official transliteration of Thompson’s name.

“Some are simpler,” added Kapur, who wrote a viral Twitter feed on basketball nicknames a few years ago. “Charles Barkley was called ‘Flying Pig.’ »

Kapur said nicknames can be ironic, affectionate and teasing all at the same time.

Take, for example, “Bucket of Scallion” (葱桶), a nickname given to the Chinese Olympic figure skating duo of Sui Wenjing and Han Cong. Sui once made fun of her own physique, saying her waist was like a bucket. And in Chinese, the word for shallot is similar to the name Cong. So the fans, naturally, put them together.

The logic behind “Daughter from a Rich Family” (千金) for Shcherbakova is both poetic and literal.

“Her overall performance is elegant,” Peng Minjian, 27, a figure skating fan from Jiangxi province, said of Shcherbakova. “And she came from a rather wealthy family.” Peng runs a verified figure skating news account on WeChat and has several nicknames under her belt.

And then there’s “K Baby” (K宝), the widely used nickname for Kamila Valieva, a 15-year-old Russian figure skating phenom, who nods to her youthful virtuosity. The name echoed on social media this week after it was revealed that Valieva had tested positive for a banned substance ahead of the Games.

The names, according to fans and scholars, tended to be created and started by die-hard fans on social media platforms and message boards – as part of what Xin Yang, a language professor at Macalester College, described as the “online carnival culture of China’s youth”. ” — before crystallizing for wider use.

Chinese short-track speed skater Ren Ziwei, who won a gold medal in the 1,000 meters, is nicknamed “Elephant” (大象), either for his large size or his unstoppable presence, depending on the version of the lore.

But it’s the Russians, with their dominance in figure skating – China’s most popular winter Olympic sport – and, yes, their sometimes long names, that seem to inspire the most creative naming.

Zhou pointed, for example, to Alexandra Trusova, another Russian skater. Chinese fans on the internet call her “Shasha” (莎莎) due to the basic transliteration of her Russian nickname, Sasha. But they also affectionately call him “Czar” (莎皇).

“The way she skates is very dominant and bossy,” Zhou said. “Figure skaters are bound by traditional aesthetics: elegance and softness. But Shasha is not like that.

Claire Crazy contributed to the research.