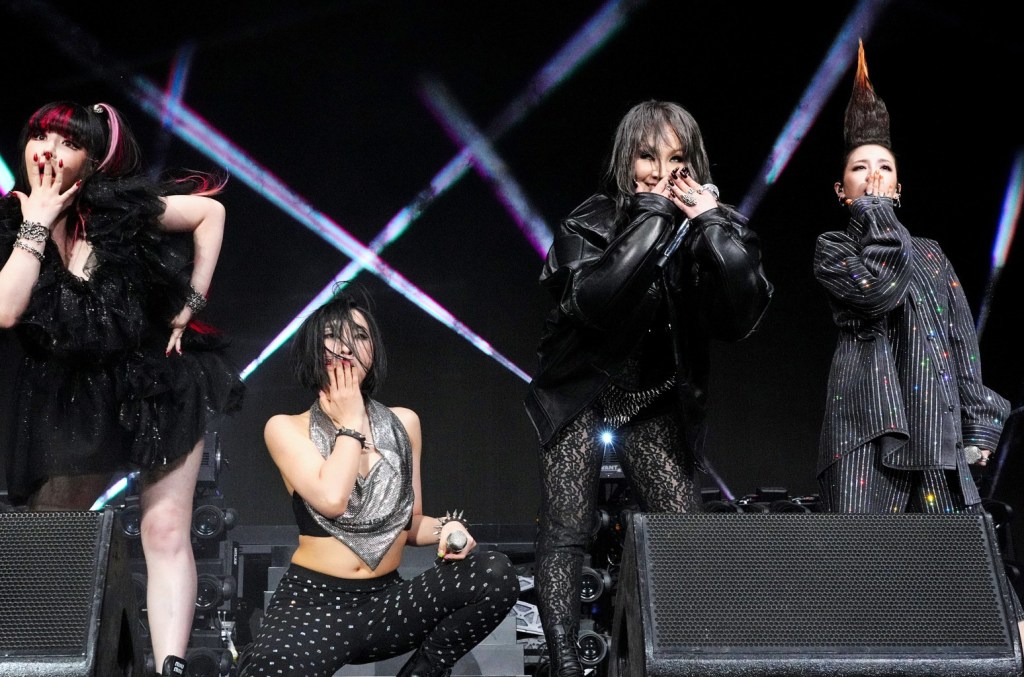 Day two of Coachella 2022 Weekend One is officially in the books. Saturday, April 16 in the desert marked a few firsts for many historic artists and sets, setting a new precedent for the festival.

For starters, Argentine trap sensation Nicki Nicole performed for the very first time in the United States, making her American debut on the Sonora stage. The emotional 21-year-old artist said: “I never imagined that so many people would come to see my first show in the United States”. Meanwhile, on the main stage at Coachella, 88Rising’s set made history as the first time a record label landed a slot on the Coachella lineup. Additionally, Brazilian star Pabllo Vittar became the very first drag queen to perform at Coachella.

Saturday’s headliner Billie Eilish also became the youngest performer to headline the festival. His loyal fans weathered the gusts of wind that only seemed to get stronger by the minute. The 20-year-old chart-topping artist closed day two by singing back-to-back hits such as “Bad Guy,” “All the Good Girls Go to Hell” and “Happier Than Ever.” Eilish also had special guests Khalid, Damon Albarn from Gorillaz and Posdnuos from De La Soul joining her on stage.

Check out Saturday’s top 14 moments below.

3:32 p.m. — Mexican singer-songwriter Ed Maverick hit the Sonora Indoor Stage performing in front of a large crowd. “Hello, my name is Eduardo. Hello to all Eduardos.” He then performed a nostalgic set singing his heartbreaking anthems, the ones he hoped to sing in 2020 when he was first booked in. “I still can’t believe I’m playing Coachella,” he said with emotion to the crowd, to whom he later apologized after his guitar “didn’t sound like I wanted it. Towards the end of his 40-minute performance, he brought in Señor Kino to perform their collaboration” U-shaped Vuelta”.Arriba Mexico, Arriba el rock.” He finished a fan favorite, “Fuentes de Ortiz” and then left the stage as his fans asked “other, other (one more).”

4:00 p.m. — Fresh off the show at the Dreamville Festival two weeks ago, JID brought out the ‘Ville in the West. The Atlanta rapper released EarthGang to perform “Meditate” and their verses on the Revenge of the Dreamers III hit “Down Bad.” “Open it!” they all shouted to the crowd to start a mosh pit. JID showed off his rapid fire rate throughout his set, performing songs like “Off da Zoinkys,” “Workin Out,” and “Skrawberries,” which he dedicated to the ladies of the crowd. “Women are cooler than guys,” he said. At one point, fans started singing along to a particular song and the Dreamville rapper humorously replied, “Y’all are trying to ejaculate prematurely!” First we have to do some preliminaries. While JID encouraged mosh pits, the artist still urged everyone to stay safe as he was joined by rising artist Kenny Mason to perform their new song “Sitck” from recent D-Day: A Gangsta Grillz Mixtape from Dreamville. The two then performed an encore of the song to close out JID’s set.

4:40 p.m. – A teary-eyed Nicki Nicole, who made her US debut at Coachella, thanked fans for supporting her. “I never imagined that so many people would come to see my first show in the United States,” she said, holding back tears as she also grabbed a flag of her native Argentina that a fan had given her. Free. Towards the end, she also invited a little girl from the crowd to join her on stage to sing “Wapo Traketero.” Although the little girl was in shock and remained frozen, it was a sweet moment between Nicole and her little fan.

5:30 p.m. — Despite performing “Peaches” on his own, Giveon put on a soothing show with live instruments for his Saturday night set on the main stage. The Long Beach singer performed songs primarily from his 2021 album When It’s All Said and Done…Take Time, with the exception of “Peaches” and a semi-rock version of his verse on “Chicago Freestyle” from Drake. Giveon certainly dressed the part in a blue Chanel button-down shirt with a white collar and cuffs and multiple chains. He also held a glass of what looked like white wine for part of his performance before dedicating “World We Created” to a couple in the crowd he interacted with. “How long have you been together? Do you have a song? The next song I’m going to play is your song, it’s only yours, okay?” the R&B singer told them. Giveon concluded with an extended version of “Heartbreak Anniversary.”

6:12 p.m. — Cuco’s trippy, rocking ensemble seemed tailor-made for the desert, a fact proven by his performance of “Under the Sun,” a swaggering, horn-heavy song that captured the golden hour perfectly from Coachella.

7:04 p.m. – The 88Rising set – which worked as a high-quality, ultra-impressive talent show – made history as the first time a record label landed a spot on the Coachella lineup . The 80-minute performance felt like a celebration; From the long-awaited return of K-pop act 2NE1 to J-pop artist Hikaru Utada’s debut festival set, there was something worth applauding at every turn. But one of the set’s standout moments came on the NIKI label, which was backed by a 15-piece orchestra as she delivered her song “Split,” which she introduced by saying, “This next song is for my family and my country.” As for how the label will remember such an achievement, he thought ahead – 88Rising has released a new compilation album titled Head In The Clouds Forever.

7:26 p.m. – French record producer Tchami unexpectedly released Gunna during his Saturday night set at the Sahara Stage. The two performed their song “Praise” and then Gunna rapped “Pushin P” for the second time after joining Lil Baby for “Drip Too Hard” on Friday night, April 15.

8:10 p.m. — Fans were already feeling the energy of the Disclosure set, as the DJ duo played a medley of fan-favorite beats including “Latch,” “Tondo” and “When a Fire Starts to Burn.” To further increase the hype, Khalid appeared on stage in a lime green suit to perform the band’s 2019 collaboration, “Talk.”

8:30 p.m. — Pabllo Vittar soaked up all the love his fans had to offer. After all, she was making history tonight. “My name is Pabllo and I’m a drag queen from Brazil – the first drag queen to perform at Coachella,” she said. His energetic and fierce set on the Gobi stage drew fans who kept dancing to his trilingual techno and pop anthems. Towards the end of her set, she brought in Rina Sawayama to perform their new single “Follow Me”. Saying goodbye, Pabllo couldn’t help but cry. “muito obrigada. Thank you, Coachella.

8:35 p.m. – Flume had to restart his set after a brief mess, but the hiccups didn’t seem to phase him. The DJ/producer delivered “You & Me” seamlessly before kicking off a guest lineup starting with Vince Staples for “Smoke & Retribution.” Other surprise drop-ins came courtesy of MAY-A and Oklou, which were sprinkled throughout the set which also relied on new music – and fittingly featured Flume’s remix. from the track SOPHIE “Is It Cold in the Water?”

10:09 p.m. – Megan Thee Stallion delivered a set filled with old mixtape hits and more recent hits like “WAP” and “Savage” – and even dropped a new song, which she said was personal and dedicated to her to “who the f— it may concern…” Fittingly, the song ended with Meg repeating the line, “Yous ab—-. But more than at any point on set, Megan doubled down on what Anitta — with her own sex-positive performance — came true on day one. Being yourself certainly pays off. As Meg said best, “I want to take a second to say: Real hot girl s—.”

10:35 p.m. – Stromae opens its highly anticipated return to the Coachella stage with a Pixar-esque animation, in which a cartoon version of the singer flies around Indio from March. He then performed a dynamic set, featuring old and new hits, a robot dog delivering a sweater to Stromae on stage, and impressive background animations. One of the highlights of the set was “Sons of Joy”, in which the Belgian star stood on a podium, giving a press conference to the public about a deceased sex worker. The song reflects on the deaths of various people in her life, highlighting how each character has their “closed eyes” to the stigma of women in sex work.

10:50 p.m. — Marking his first performance since his sex tape involving two other men leaked in February, Isaiah Rashad kicked off his set with a video montage addressing the elephant in the room. “The purpose of doing this was to embarrass him. However, it backfired on us,” one of the voices said. “When his video leaked, his dreams and everything went up.” The Chattanooga rapper kicked off his Saturday night Sahara Stage set with Kal Banx performing “RIP Young.” He then released Doechii for “Wat U Sed” and his new song “Crazy”. “I see all the messages and all the positivity. You all have kept me alive for the past two months,” he said. SiR also made an appearance for “Rope//rosegold.” Rashad closed his set with “Headshots”.

12:37 p.m. – Towards the end of Billie Eilish’s second day as the headliner, the superstar treated fans to a guest performance from Damon Albarn – consider it her own “When Harry Met Shania” moment (from day one headlining Styles). Albarn took to the stage to lend his vocals to ‘Getting Older,’ from Eilish’s second album happier than ever, and stayed for “Feel Good Inc.”, for which De La Soul’s Posdnuos also joined and injected the final track from Eilish’s set with great energy. “This is the craziest shit I’ve ever been through,” Eilish said. “This man changed my life in so many ways and changed my vision of what music, art and creation could be.”

Why Tax Refund Loans Are Bad: Fees, Interest, and Risk