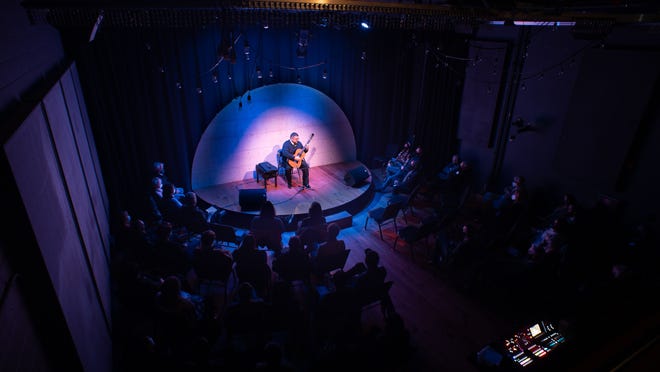 The latest is called the Rosette. Carved out of a former gymnasium of the former Baker School in Hyde Park, it houses Austin Classical Guitar.

As experienced on March 5 during the group’s “Dreams and Wonders” concert, this intimate room is a jewel.

The site comes with a lot of history. In 1856, the then-progressive Texas State Lunatic Asylum opened just across the street from here. Its original Greek Revival building is still part of the Texas State Hospital complex.

During the 1880s, the Texas State Fair was held in these wooded prairies. A ringed racecourse nearby. During the 1890s a recreational lake for the new Hyde Park neighborhood, fed by the springs of the West Branch of Waller Creek, filled this particular site.

Located at 3908 Avenue B, the Baker School was built in 1911. It replaced the lake and stands proudly over three stories.

To enter the Rosette, park on the West 40th Street side of what is now called the Baker Center and follow a marked path to the venue doors on the first floor.

The venerable building is now owned by Tim and Karrie League of Alamo Drafthouse Cinema. Their business takes up the second floor, while the duo envisions even more community functions for the first floor, now covered in movie posters and populated with fake school kids – a bit spooky.

Besides the Rosette, a café on the same floor serves as a rehearsal room for Conspirare, Austin’s Grammy-winning choir. It’s in pretty good condition and would also make a cool show venue, with a bit of retooling.

The rosette, named after the ornate mosaic that surrounds the rosette of every classical guitar, is already a masterpiece of warm sound. It can accommodate 85 people on two levels. The lower seats revolve around a half-moon shaped stage perfect for chamber music and, one might imagine after that guitar concert, flamenco dancing as well.

“Dreams and Wonders” featured Matthew Hinsley, the band’s visionary executive director, who directed his efforts toward public service as a classical guitar teacher admired around the world. Wearing shimmering floral slippers that stole some concentration, the open and cheerful performer performed on a stage equipped with seven microphones. All were used to deepen the sound of a series of dreamy and wonderful numbers.

Hinsley likes to mix music. A traditional Scottish tune paired with a cello suite by Bach; “Evocación” by José Luis Merlin associated with “Fantasia” by Merlin’s contemporary Sylvius Leopold Weiss. Hinsley created “The Rosette”, a rhythmically whimsical piece which he based on a theme produced by one of the band’s teachers. He dedicated it to Tim and Karrie League, longtime friends and creative collaborators of Hinsley.

The grand finale featured two other performers for five numbers: William Flores, a former McCallum High School guitar student who played in military bands and now sits on the association’s board of directors, and Bouchra Hachem, a Lebanese American singer. whose rich, plaintive voice applied singular phrasing to familiar works such as “La Vie en Rose” and rare selections, such as a heartbreaking song about his homeland, “Li Beirut”.

The Rosette is a welcome new home for the arts in Austin and not just for the classical guitar band.

“Our space includes not only theater, but also offices, education and gathering spaces,” explains Hinsley, “and access to large indoor and outdoor spaces that will allow for significant growth and variety in our programming. Within the theater, we have installed sound, light and video capabilities that will not only enable live streaming, but also the growth of our recording services for students and community members in our programs, as well as multimedia artistic projects.

“We’re still working out the usage details,” he adds, “but other arts organizations will use it, that’s for sure.”

Michael Barnes writes about the people, places, culture, and history of Austin and Texas. He can be contacted at [email protected]

MoneyMutual Review: The Leading Payday Loan Company to Use?