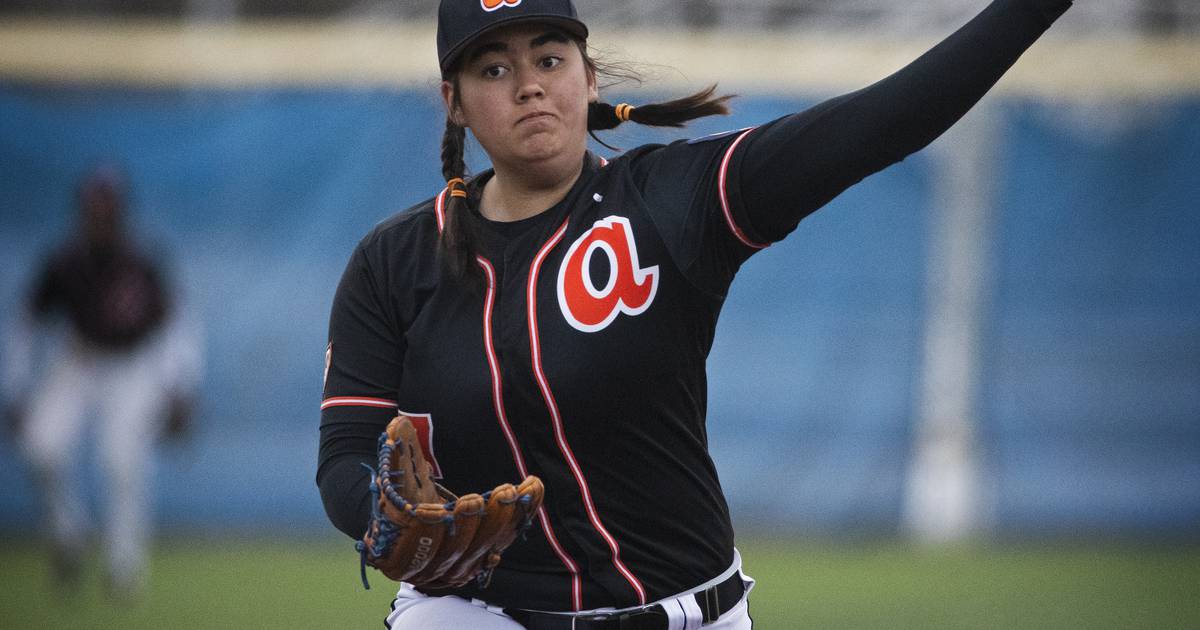 Athena Clendaniel, a senior at Anchorage’s West High, is a star on the baseball field and in the classroom

Athena Clendaniel managed to do what few student-athletes are able to do.

Balancing athletics and academics can be quite a difficult task. Excelling in both areas is an even greater challenge.

Not only has Clendaniel broken barriers as a baseball pitcher for West High, but she’s also one of the school’s most decorated students.

She started playing baseball in her youth and became one of the few girls to compete at the college level in Alaska. Although the senior is not giving up the sport completely after graduating this month, academics will be her main focus going forward.

“I love baseball and sports are a huge part of my life, but I won’t be playing it much longer and the academic part is even more important,” Clendaniel said. “The student comes first in the student-athlete.”

Her passion for baseball ignited when she was 5 years old, after her father signed her up for T-ball.

“I just fell in love with it on the spot,” Clendaniel said. “Since then, baseball is what I’ve done every summer and I couldn’t imagine doing anything else.”

“She’s the first in, the last out, leading by example, leading the class, everything,” West baseball head coach Dane Kreischer said.

Developing a love of the game

Growing up, Clendaniel didn’t know any girl playing baseball at any level until she heard about Lauren Frost.

“She’s a few years older than me and she played baseball at Eagle River High School,” Clendaniel said. “My dad saw an article about him in the newspaper, and then he realized that I could keep playing baseball through high school if I wanted to and just kept pushing myself. .”

Unlike most young girls who shown an interest in baseball, Clendaniel never turned to softball as an alternative. Although it might have provided her with an easier path to playing time and maybe even a college scholarship, she decided to play the sport she was most passionate about.

“I get those questions a lot, especially as I’ve grown and continued to play with the guys and they’ve gotten bigger and stronger, but when I prove myself on the pitch, the questions seem to stop coming,” Clendaniel said. “When people ask that question, I tell them I love baseball and I think it’s the best game on earth and there’s nothing I’d rather do.”

She is one of only two seniors on the team this season and is captain. It’s a group she’s been playing with since Little League.

“I fell naturally into that leadership role as captain, and this year I know we have the talent to win games, do well and hopefully be successful,” Clendaniel said. “Hopefully I can inspire greatness in these guys and get us Ws on the pitch.”

She feels like she’s had quite an unusual journey as a girl playing baseball, with nothing but support and nagging her teammates.

“For the most part I was super lucky,” Clendaniel said. “All of my teammates, I’ve been playing with most of these guys since little league when we were 9 and 10 and they’ve all been very supportive of me.”

Fans and other parents are generally encouraging as well. Clendaniel said she encountered no hostility or negativity, and even when she was heckled it was playful and, she said, generally welcomed.

“Just some friendly heckling, and I actually appreciate that because I think it means guys respect me,” Clendaniel said. “Some teams heckle other pitchers and not me, and that’s fine too, but when they heckle me, I really appreciate it. I really haven’t been faced with any negative comments from opposing teams and coaches.

A focus on academics

Founded in 1746 and the fourth oldest institution of higher learning in the nation, Princeton has very rigorous admissions standards with an acceptance rate of approximately 6%.

“I’m super excited,” Clendaniel said last month. “I just visited the campus last week and it’s amazing. It’s nice. I am so excited to meet all these new people and continue my studies there.

West’s principal, Sven Gustafson, has known Clendaniel since she was in seventh grade and he was the principal of Romig Middle School then.

“Athena is an amazing student,” Gustafson said. “She is top, Russian immersion, all higher level courses. She is the epitome of an incredible student and an all-around student-athlete.

Despite her love for the game, she never really considered making it a priority when she left high school.

“I’ve always outdone myself in the classroom and I know baseball is fun and a great way to relieve stress and I love being on the field. But I know my future has to be strong in academia, and that will help me later in life,” Clendaniel said.

But she might try to mix her passion for baseball into a career. She said she was considering majoring in psychology and was interested in kinesiology.

“I’m really curious and want to know more about the physical and mental side of the sport,” Clendaniel said. “My dream job would be with a professional sports team like (in) MLB.”

As a left-handed pitcher, she’s interested in the mental approach to her own game. After games, she spends time thinking about what worked, what didn’t, and which specific hitters were successful. well with some throws.

“I don’t throw that fast, so I rely on my off-speed throws and whereabouts,” she added. “My pitching mindset is I have to hammer strikes into the zone, hopefully keep the hitters off balance with my few different off-speed pitches.”

Creating opportunities in sports and around the state

She has championed girls and women’s baseball with her work as an ambassador for Baseball For All, which is a non-profit organization focused on building gender equity by creating “opportunities for girls of to play, coach and direct in sport”.

Clendaniel organized and ran local young girls’ camps in the Anchorage area for girls interested in playing with boys. As many colleges begin to implement women’s baseball programs, Kreischer says it’s encouraging to see work like hers paying off. He was an assistant for West last year and first met Clendaniel when she invited him to help the coach at one of the camps she organised.

“There were 25 to 30 girls there, and some of them had never played baseball before — they were going the softball route and were pretty excited,” Kreischer said. “At the time they left, Anchorage Little League had more girls signed up than in the past five years, so the impact is immediate for what they do.”

According to Kreischer, Clendaniel is one of two girls playing varsity in Alaska and the only pitcher. He said the other varsity player is Monroe’s second Catholic student, Nadia Chernich.

Clendaniel is the first girl to play baseball at West, but she hopes to inspire the next generation to follow in her footsteps, even though she only has a general interest in the sport.

“Obviously there aren’t enough girls playing this sport right now,” Clendaniel said. “What I’m trying to do is just get more girls into the game and let them know baseball is an option.”

She plans to hold more camps in the future over the summers to let young women know that there is a realistic avenue for them if they want to take up the sport. Her hope is that one day there will be full women’s baseball leagues and teams.

“I’m hoping that once I get settled in Princeton, I can start a women’s baseball team there, and I think that could be very successful considering they already have a DI softball team,” he said. she declared.

She’s sure that at least a few young women on the softball team come from baseball, and even if that’s not the case, “A lot of the girls who play in a women’s club don’t already have any baseball experience and it’s about having more women out on the pitch.”

Clendaniel is excited to move to the East Coast, where there are more opportunities for her to continue playing the sport, even if it’s not for an NCAA-sanctioned program through college. The first female University Club Baseball Tournament took place in March and most of the teams were from the west coast. Montclair State University in New Jersey was the only exception.

“There are many girls’ baseball programs across the country,” Clendaniel said. “We unfortunately don’t have one here in Alaska, but there are several programs in the New Jersey area – and I hope to get involved in those.”