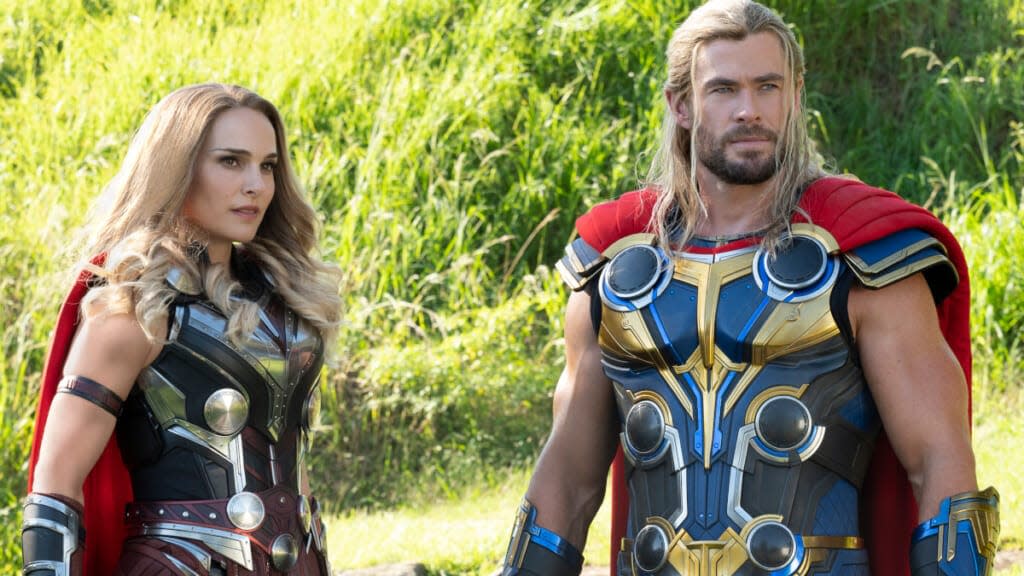 Like “Eternals” and “Doctor Strange in the Multiverse of Madness” before it, “Thor: Love and Thunder” arrived to less enthusiastic audience reception than the rave reviews we’ve come to expect from the Marvel Cinematic Universe. But how much will that affect its run at the box office?

This weekend, Taika Waititi’s second go-around with the God of Thunder opened to $143 domestically and $302 million worldwide, but joined “Eternals” and “Multiverse of Madness as the third consecutive Marvel film released by Disney to not earn an A or A- on CinemaScore, earning a B+ instead. Before last November, the only MCU film that slipped below the A range in the audience poll was the first “Thor” in 2011.

For “Eternals,” lukewarm audiences and reviews from critics, combined with an unfamiliarity with the dozen characters it introduced and a foreign market still struggling with COVID, left it struggling to reach the break even. The Chloe Zhao-directed film barely broke $400 million worldwide, and its domestic total of $164.8 million was down 27% from what “Shang-Chi and the Legend of the Ten Rings reported just two months prior with the kind of public buzz Marvel is used to.

“Doctor Strange in the Multiverse of Madness” had more going on, so it was able to perform well this summer despite a softer-than-expected audience reception. With three weeks in May as the only blockbuster in theaters before “Top Gun: Maverick” arrives, “Multiverse of Madness” turned its $187 million opening into a three-week total of $354 million.

With Doctor Strange and ‘WandaVision’ protagonist Wanda Maximoff still hugely popular thanks to their appearances in previous Marvel titles, the film was able to become the second highest-grossing film of the year so far, despite fan disappointment. stalwarts about Wanda’s villainous turn and that the movie didn’t delve into the multiverse storyline teased by “Loki” and “Spider-Man: No Way Home.”

The impact of this disappointment was felt more after the arrival of “Top Gun: Maverick”. Quickly establishing itself as the most exciting film of the year while withdrawing support from the premium format, “Maverick” took the legs of “Multiverse of Madness”, which made only 14% of its national total after the release of Tom Cruise’s blockbuster. While it’s hard to say how much better it would have been against Memorial Day weekend’s biggest release, “Multiverse of Madness” might have had the legs to hit $1 billion worldwide. had received more enthusiastic reception than “Shang-Chi” or “No Way Home” had.

The good news for ‘Thor: Love and Thunder’ is that it won’t have to worry about a ‘Maverick’ level blockbuster. The biggest movies remaining for mainstream audiences on the summer list are Universal horror flick “Nope” and Sony action comedy “Bullet Train,” neither of which are expected to open above $55 million. . While it’s possible that either film could steer moviegoers’ interest away from “Thor” if word-of-mouth is strong enough, it probably won’t live up to what we saw at the end of May.

This means that the performance of “Love and Thunder” will be on its own merits. Director and co-writer Taika Waititi crafted this film to please the crowd with “Heavy Metal”-inspired visuals and more of the goofy Thor that filmmaker and star Chris Hemsworth introduced in “Thor: Ragnarok” four years ago. year. Thanks to that previous success, “Love and Thunder” opened better than last July’s Marvel movies like “Spider-Man: Homecoming” (which opened to $117 million) and is expected to end in a similar range with a total national from 325 to 350 million dollars. .

But if the movie’s second-weekend total falls below $57 million, that would be a drop of more than 60% and a sign that without the usual Marvel buzz, “Thor: Love and Thunder” is heading towards a theatrical release in preview. Even so, that won’t stop this movie from being a box office hit, and upcoming Marvel movies like “Black Panther: Wakanda Forever” and “Guardians of the Galaxy Vol. 3” should also be able to. to perform well compared to the popularity of its predecessors, even though audiences don’t think they’re as good.

But that MCU goodwill isn’t endless, and franchises from “Star Wars” to Wizarding World have seen their diminishing returns when audiences don’t feel their recent offerings are as good as before. Social media grunts around the MCU’s Phase Four haven’t yet made such a big dent in the movies’ box office fortunes, but the numbers could dip in the coming years if future Marvel releases don’t receive not the crazy excitement that “No Way Home” got. The kind of response from the MCU fandom that the franchise has scored flawlessly in the past.